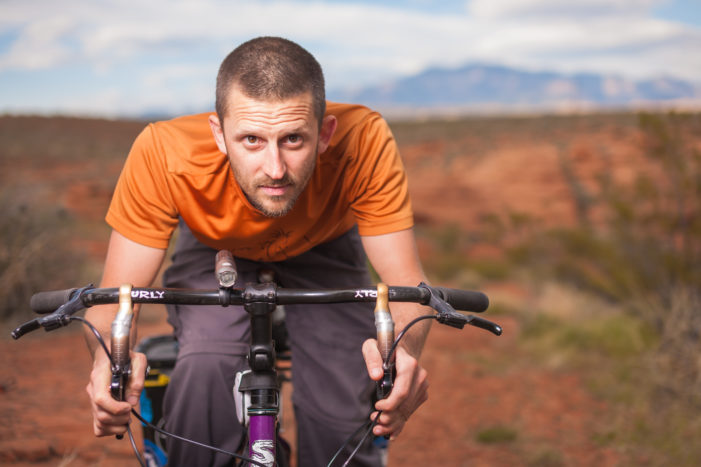 BY PHIL CUSTODIO
Clarkston News Editor
Clarkston native Chris Haag and his wife Sophie George could use some support on their upcoming bicycle trip. They’re planning a two-year odyssey covering the two continents of the western hemisphere.
“I heard about others doing this ride a few years back and have always been captivated by it,” said Haag, who grew up in Clarkston and graduated from Clarkston High School in 2001. “It will just be my wife and I, although we’re hoping that some friends and family will join us along the way. My grandma will go with us for the first 10 days as we take a ferry through the inside passage from Washington to Alaska. We don’t have any firm plans for others to join us after that, but we have some adventurous friends, so I’m sure we’ll get together with a few along the way.”
The couple is planning to ride from Alaska to Argentina, almost 20,000 miles, to promote cycling as a sustainable means of transportation and travel. Averaging 50 miles each day, four days a week, it will take no less than 18 months.
“That gives us plenty of time to see some sites and meet people. There’s so much to see and do along the way though that we don’t want to rush it,” said Haag, who currently lives in Utah. “As far as cycle touring goes, it’s iconic. Lots of people ride across the U.S. from east to west, but there is this other element of adventure that comes into play when you talk about crossing two continents, 15 countries, and countless cultures.”
Most of the planning consists of choosing the right gear to be as light and small as possible.
“You don’t want to carry anything you don’t have to, but you want to be prepared for anything,” he said. “Do we carry a small spare folding tire at one pound, or a few tube patches and needle and thread for major tire damage that only weigh a few ounces? Decisions like that can cut lots of weight and make riding much easier.”
They’re going old school on the bikes, with steel frames instead of carbon fiber.
“By modern standards, our bikes are quite primitive. You want everything to be simple and readily available,” he said. “Steel frames are easier to repair than aluminum or carbon fiber if they get damaged, and old school mountain bike tires are easier to find in developing countries so we sized our wheels for those.”
They will carry a small tent, in which they plan to spend most nights.
“Once we hit Latin America you can get some amazing hotels for a reasonable price so we will treat ourselves from time to time,” he said. “There are also websites such as warmshowers.org that connect cycletourists with people that are willing to host them for a few nights to have a real bed, a shower, and do laundry. That is a bit more prevalent in the states, but exists throughout the world.”
Haag grew up in Independence Township, and his older brother and mother both still live there.
“I’m still trying to figure out what they think of the whole thing. Nick, my brother, likes to make jokes that I will be mauled by a bear,” Haag said. “I asked my dad (Doug) how he felt about me sort of skirting responsibility for a few years. He laughed and asked, ‘Why start now?’ Generally everyone is supportive about it, even though they may not understand it.”
Chris worked at the Clarkston Union for 10 years from the age of 15 to 25 before working for a local energy conservation company.
In his early 20’s, the Union was a launch pad for him to meet interesting people and make friends around the country, he said.
“Both the employees and customers were an eclectic group and I was fortunate to meet people that were doing things with their lives that were outside the norm,” he said. “When I was 20, I had a customer talking about going to Hawaii for a few months. I bought him a few drinks and told him that I wanted to go too. I used the same trick the next summer to hitch a ride to Alaska.”
Keeping in touch with all of those people and watching their travels and experiences in opening businesses inspired him to make a serious effort to achieve some of his own dreams, he said.
Michigan is great for touring with all of the coastline and rails-to-trails projects, he said.
“You can ride almost 90 miles from Cadillac to Grand Rapids without having to get on a road,” he said.
He and his wife, who is from London, rode from Detroit to a festival in Rothbury, Mich., a few years ago.
“That trip was about 300 miles. She caught a ride back home with some friends after and I kept riding to Luddington and took the ferry across lake Michigan to Wisconsin and then rode through the UP, across the Mackinac Bridge, and then back home,” he said.
Sophie spent a year travelling through Asia, so she is no stranger to extended touring, Chris said.
“Although doing it on a bike will be a new challenge for her,” he said.
The couple will be blogging on their site, www.theplacesipee.com, as well as posting on Instagram along the way. The website includes a “pay now” link if readers wish to provide financial support, to “buy us a drink, dinner, or a night in a hotel so we can take a shower,” Haag said.