‘An amazing coach and teacher’ 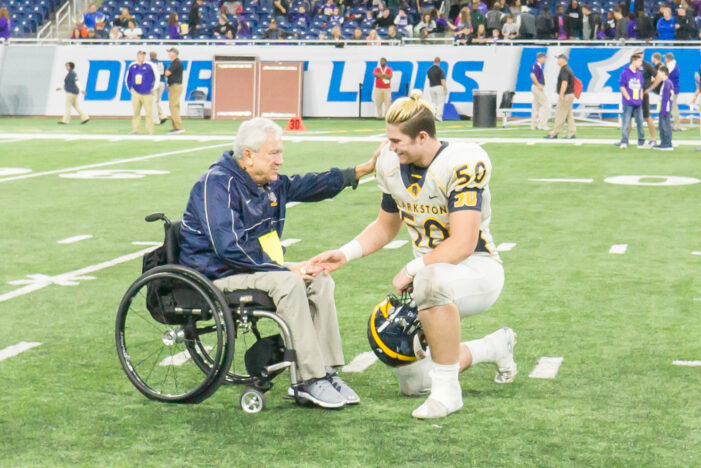 Everyone at Clarkston High School stadium honored Steve Himburg with a moment of silence before the Wolves’ football game on Friday night.
Himburg passed away suddenly at home on Friday, Oct. 1 while he was watching the Clarkston Varsity Football team play West Bloomfield. He was 76.
“The last words he said to me were ‘Clarkston just scored,'” his wife Mary shared. “We are all pretty sad and devastated. We are surrounded by so much love and wonderful memories and experiences we have had in Clarkston.”
Steve had an impact on everyone especially his years as a teacher and as a coach, especially as the head coach for Clarkston Eighth Grade Football.
“He was an amazing coach and teacher,” said son, Rob. “I think a lot of those enduring life lessons are ones I feel so grateful this year with what I think will be thousands of people who he taught and coached.
“He is who taught me you can always go beyond your preconceived limits and that’s really what was in the context of athletics that’s what champions did; if it was the context of school and education it was what the most conscientious learners did; if it was in conscientious learners did; if it was in the context of your personal life it was what a best friend, partner, father, husband did.