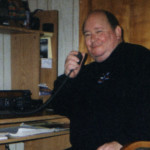 Andrew Letson Hollibaugh, of LeRoy and formerly of Clarkston, passed away Saturday, September 3, 2016 at Spectrum Health’s Blodgett Campus. He was 74.

Andy was born on February 27, 1942, in Pontiac, Michigan to parents William and Margaret (Fellows) Hollibaugh. He entered into marriage with his beloved Diane Elaine Weiss on January 15, 1966, in Royal Oak, MI. A marriage lasting over 50 years until Diane’s passing just this past June.

Andy made his living working as a quality control inspector for General Motors at their truck and bus plant for nearly 33 years. He had a passion for fantasy football as well as amateur radio and was part of the Wexaukee Amateur Radio Club. Andy was also a member of the Dighton Wesleyan Church.

He was preceded in death by his parents.

Memorial services were held on Saturday, September 10, 2016 at 11:30 am at the Dighton Wesleyan Church with visitation one hour prior. Officiating was be Rev. Derek Carpenter. Interment will take place at the Great Lakes National Cemetery in Holly along side his wife, Diane at a later date.

Memorial contributions may be directed to the Dighton Wesleyan Church, the Wexaukee Amateur Radio Club, or Hospice of Michigan.

Condolences and memories may be shared with the family online at www.Hitesman-Holdship.com

The family is being served by the Hitesman-Holdship Funeral Home.