Athletes of the Week – Hard works pays off 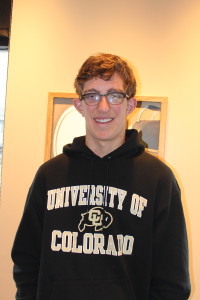 BY WENDI REARDON
Clarkston News Sports Writer
MacGregor Schaffer suited up every Clarkston Hockey game in his pads and uniform ready to go.
“I didn’t play a lot,” said Schaffer, a senior at Clarkston High School. “I didn’t get a lot of chances scoring wise. I was happy just to play and happy to say I played varsity.”
It was a goal for him especially since he didn’t know if he would play on the varsity team. Schaffer was diagnosed with neurofibromatosis, a genetic disorder of the nervous system when he was an infant.
“I was really happy even if he didn’t play,” said his mom, Wendy. “I loved every time I saw him sitting on the bench either he was going to play or wasn’t. When he did play it was a thrill for my husband and I. We questioned if it would ever happen.”
Another thrill to the season was receiving the Michigan High School Hockey Coaches Association Perseverance Award.
“I was very happy he won the award,” smiled Ralph Humphlett, head coach, who nominated him for the award. “He is very deserving. He never asked for anything. It was awesome. It was one of the best things that happened during a very hard season. He received a standing ovation.”
MacGregor learned about the news from Wendy and his dad, Bob.
“It was a huge honor,” MacGregor said. “I didn’t even know it was a thing. I feel honored representing my team and my school.”
“It was so exciting,” Wendy added. “We were thrilled for him. It has been a really great year for him so far. Just getting on the hockey team was a big deal and something he always wanted to do. He worked hard. It recognized he had some issues he was dealing with, but he still showed up and did his best. That doesn’t always happen in life – you might work hard and might not get recognized.”
She explained it was a tough year because MRIs revealed he had two tumors.
“It hasn’t affected me,” MacGregor said. “But it is something to look for in the future.”
One of the tumors is from neurofibromatosis, which his parents discovered when he was three-months-old.
“He had little tan spots on his body and we didn’t think anything of it,” Wendy said, explaining they thought it was baby skin – it was sensitive and could change.
The doctor asked how many spots and Wendy said about 12. The doctor replied a certain number could be something.
“We went to different specialists who confirmed,” she said, adding over the years they have learned and taken in as much information. “The more you learn about anything going on with your body, the better. He has been a mild case so far.”
MacGregor said it hasn’t affected him besides having help with school up to sixth grade.
“I haven’t had any problems,” he said. “Fifty percent of kids with neurofibromatosis have learning disabilities or need school help.”
“He has been lucky,” Wendy said. “Most people who have this condition have some learning disabilities. More of anything it is maturity and an awareness that makes him a little bit different which can also be being a teenage boy.
“He is a really sweet, innocent soul,” she added. “He lives for the day. He lives for the moment. He is excited about simple things like food, what he is eating for dinner and watching the Red Wings. He enjoys everyday.”
For sports it didn’t slow him down as MacGregor began playing hockey when he was 5-years-old.
“Hockey is a big part of our lives,” Wendy smiled.
His older brother, Cole, and his dad both played and the family are huge Detroit Red Wings fans.
“It was an expectation Mac had for himself early on that’s what you do – you play hockey and you play hockey in high school,” Wendy added. “He has always said he wants to do everything like everyone else does. It was nice to see that he did.”
“I tried everything,” MacGregor said. “Hockey was the only thing I loved as much as anything else in the world.”
MacGregor is attending Oakland University after graduation and plans to study film production. He was originally planning on becoming a director or a film editor but said he is shifting towards acting.
“I have done a lot of videos, movies and TV shows through high school,” he added. “It’s kind of what I have decided for now, but I would like to do anything in films. Most recent we did two episodes of a TV show an intern wrote. I ended up being the lead role that was a fun experience.”
His advice for aspiring athletes is to work hard.
“As hard as you can in practice,” he added. “It goes by way too fast. Enjoy it while it lasts.”

Athletes of the Week – Hard works pays off added by Don Rush on April 15, 2016
View all posts by Don Rush →