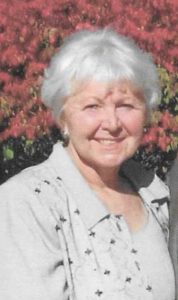 BUCHANAN, BETTY MAE SADDLER of Ortonville, MI passed away peacefully at home on June 11, 2019 after a brave and furious battle with Pancreatic Cancer.  She was 68 years old.  Betty was born in Jackson, MI to Ilah Saddler.  They later moved back to the Saddler farm where she lived with her mother until she was 8 years old.   It was then that her mother married Virgil Dowker and they moved to Johannesburg, MI.  Betty graduated from Johannesburg High School in 1969 after which she attended Lake Superior State College.  Then she moved to Pontiac and started working at General Motors.  She later returned to school and earned a Bachelor’s Degree in Business from Northwood Institute.  Then promoted to the Administrative division of General Motors, where she later retired in 2004.  Betty loved to travel which she and her husband Gary were able to do.  Whether it be backpacking to the bottom of the Grand Canyon, exploring Scotland, a summer spent in Alaska, winters in sunny Florida, fly in fishing trips to a remote lake in Canada with their dear friends the Quinns, a trip to England with her aerobics girls, and even getting to see the Blue Footed Boobies in the Galapagos Islands.  If there was an opportunity, she took it as we all should, living a life as she said with “no regrets”.  Betty loved her grandchildren and many nieces and nephews and great nieces and nephews.  Family gatherings were always made extra special because of her, be it with many family and friends, celebrating the Fourth of July at the “Joburg House” or just enjoying and evening together playing cards. She was an avid reader and was actually able to finish her last book three days before she finished her last chapter.  Betty is survived by her husband of 35 years, Gary Buchanan; her stepson, Dean (Dolores) Buchanan of Clarkston; brother, Dale (Cheryl) Dowker of Johannesburg; sister, Dawn Aisthorpe of Johannesburg; grandchildren, Jack, Gillian and Miaya Tait of Goodrich; sister-in-law, Margaret (John) Houk; brothers-in-law, Terry (Theresa) Buchanan, Barry (Donna) Buchanan; her second dad and mom, Gordon and Betty Brown of Johannesburg; many other aunts, uncles nieces, nephews, great nieces, great nephews and cousins.  Betty was preceded in death by her mother and father, Ilah and Virgil Dowker; her step-daughter, Julie Buchanan Tait.  A memorial gathering will be from 3:00 to 6:00 p.m. on Saturday, July 20, 2019 at VILLAGE FUNERAL HOME, 135 South St., Ortonville.  An additional memorial gathering will be from 2:00 to 5:00 p.m. Saturday, August 3, 2019 at the Charlton Twp. Hall in Johannesburg, MI. The Buchanan family wishes to acknowledge with great appreciation your support at our time of loss.  To send a condolence to the family or the Sisters go to www.villagefh.com