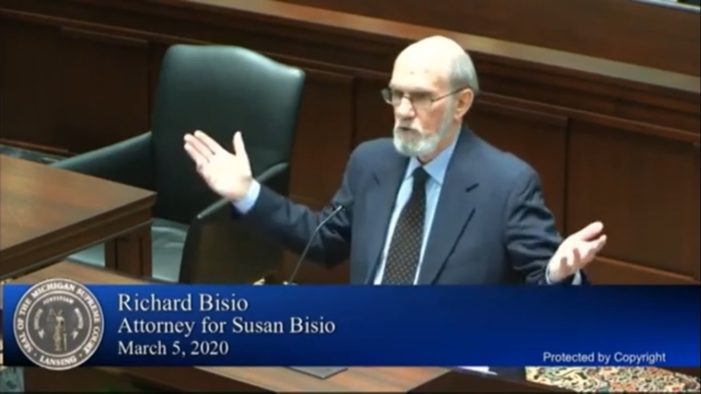 In a case that goes back five years, Susan Bisio’s Freedom of Information Act (FOIA) lawsuit against the City of the Village of Clarkston took another turn last week.
The Michigan Supreme Court, which had ruled 6-1 over the summer in favor of Bisio when the city was proven to be in violation of FOIA regarding city files containing potential land development information that city attorney Tom Ryan had stored off-site, denied a city-requested rehearing on September 30 and also awarded Bisio $1,146 in taxable costs.
The city said in the initial lawsuit that because the files were not in city-owned files that FOIA would not apply, but the Supreme Court ruled otherwise on July 24.
“The court rules require the Court’s clerk to enter judgment ‘promptly’ after denial of the motion for rehearing,” Bisio said on September 30 via her website ClarkstonSecrets.com. “Once that’s done, it means that records that are prepared, used, in the possession of, or retained by an official in the performance of an official function of a public body are public records that are subject to the Michigan Freedom of Information Act.
“This is great news, and a victory not just for me and other Clarkston taxpayers, but also for any Michigan taxpayer living in a municipality that was operating under the framework suggested by our city attorney, (most of) our city council,  the attorneys hired by the Michigan Municipal League Liability and Property Pool (MMLLPP), the Michigan Municipal League, the Michigan Townships Association, and the Michigan Association of Municipal Attorneys.
“It’s not over, but today is a good day.”
And while Clarkston Mayor Eric Haven and Clarkston City Manager Jonathan Smith refused to comment on the situation, citing the need to talk to city attorneys, one Clarkston City Council member was joyous over the ruling.
“I am pleased to see that the Michigan Supreme Court denied the rehearing on the lawsuit between the City of the Village of Clarkston and Susan Bisio, and that the court awarded the $1,146 taxable costs to Mrs. Bisio,” said Council member Sue Wylie. “I was opposed to the city’s refusal to release the 18 documents, as was requested in the 2015 FOIA request, which led to this lawsuit, because it goes against transparency in our local government. I hope that the 18 documents in question will be released quickly, and that any other final issues can be resolved expeditiously.
“I am, however, concerned about how this will affect the city’s finances, and I intend to work with the Mayor and other Council members to reduce those costs as much as possible.”
Haven did comment over the summer on the case, however.
“I will say this – good outcomes require the process to continue, unhindered and unabated with the privacy to allow it to happen decently and in order, for all parties,” said Haven. “That is the legal, American way. I ask for everyone to be patient as we work through this delicate process.”
Bisio, represented in the lawsuit by her attorney husband, Richard Bisio, also brought up the topic of who should pay her fees and costs, and how she feels Ryan’s involvement contributed to the large amount of costs and fees.
“The city attorney clearly had a personal interest in continuing the lawsuit, and I believe that made it impossible for him to provide objective advice to the city council,” said Bisio. “The city council could have prevented the lawsuit by directing the city attorney to turn the records over as soon as I asked for them, and they could have ended the lawsuit at any time.
“I have always wondered if things would have turned out differently if the city council had been advised by an attorney without a personal interest of his own in the outcome.”
So what’s next?
“The insurance attorneys have also suggested that the city attorney might not produce the 18 records if the city council asked for them – even though attorneys are ethically obligated to cooperate with their clients’ reasonable requests,” said Bisio. “In other words, they are teeing up the opportunity to rack up more costs and fees once the case goes back to the circuit court. It’s not clear if the city council has consented to this, since they only authorized the insurance attorney to contest my request for taxable costs and to file a motion for rehearing in the Michigan Supreme Court.”
Councilmember Al Avery suggested during the July 27, 2020 city council meeting that there is still a possibility that the MMLLPP will pay Bisio’s fees and costs, which were upwards of $200,000 two years ago, according to ClarkstonSecrets.com.
“If that’s not the case, then I have a suggestion,” said Bisio. “Rather than shifting the burden directly to the taxpayers, perhaps the city council should ask the city attorney to check his own professional liability coverage – and not just because the city council relied on the city attorney’s untrue statement about the MMLLPP’s willingness to pay my fees and costs to their detriment. The city attorney is responsible for causing the lawsuit because he withheld the 18 records.”