A couple weeks ago, the old bell at Brady Lodge, located in Bay Court Park off Andersonville Road, was hung once again in the tower.
“Structurally there was some rotting wood and missing support pieces,” Independence Township Treasurer Paul Brown said. “A bad storm could have blown that thing right off and killed somebody.”

The restructuring of the bell is just part of the township’s efforts to restore the 91-year-old building, which they started a couple of years ago.
Brown said the lodge has been in disrepair for at least the past 20 years. Because things were so bad, the township

had to either fix it or tear it down. According to Brown, fixing it made sense, not just because of its historical value, but financially as well.
“To put a few hundred thousands into it, to get it renovated, is way less expensive for what it would cost you to build a building like this,” he said.
In the past two years, the township has spent between $200,000 and $225,000 in repairs, according to Independence Township Supervisor Pat Kittle. Repairs included a new roof, some new structural timbers, as well as the bell and cupola on the roof.
“It was so scary because the last time a roof was put on, and I don’t remember the exact year, but they did it the cheap way,” Kittle said. “They didn’t repair any of the flashing. They didn’t repair any of the deteriorated windows up on the second floor so water started getting in under the shingles rotting the timbers, and water poured in through the broken windows on the second story and rotted all the floor boards to the point where it was almost unsafe.” 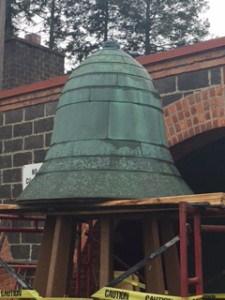 Brady Lodge was built in 1921 by George Nexsen Brady, grandson of a Revolutionary War brigadier general. When the lodge burned down in 1925, it had to be rebuilt. The lodge served as a Boy Scout Camp from 1921 to 1946. Brady Lodge was used as a mess hall and a place during inclement weather, and people camped in tent cities on the property.
In 1946, the camp was sold to the United Way, which also used it as camp through 1972.
Treasurer Brown was one of the United Way camp kids when he was 8-years-old in the summer of 1969. He said he was one of five kids raised by a single mom.

“I think Clarkston Area Youth Assistance got me a spot where I was able to come to camp here a week that summer,” he said.
Brown recalled the lodge was the dining hall, and the living quarters for the camp director were above the backend of the lodge.
“We would come here, breakfast, lunch and dinner,” he said.
Brown said each of the campers’ cottages were named after an Indian Tribe and there were about 10-12 campers in each tribe. At night he said the

lodge was used to do skits and other activities.
“I remember singing songs, ‘Jeremiah was a Bull-Frog,’” he said. “That was real popular back then.”
Brown also recalled activities at the different cottages where they did biology type projects and art projects. He also learned camper skills and was taught “the buddy system” when it came to swimming and such.
“We were able to do a little canoeing and boating on the lake,” he said. “It was just a very cool thing, fresh in my memory.
“It meant a lot to me. It was the first time away from home,” he added. “I do remember I had a blast all week, but then I sawmy mom and just started bawling and ran all the way over to her.”
Now that the lodge is foundationally secure, Kittle said next steps on the lodge project will include electrical, painting, windows and security.
“Those are my main four priorities before we get through the year. It’s in the Capital Improvement Plan 2016,” Kittle said. “We currently have $200,000 in the account. I think what we’re going to do will come in less, so we should be in good shape.”
To help out with the cost of repairs the township is also getting $30,000 from the Daughters of American Revolution (DAR) to put in new windows.
Kittle and Brown think the lodge would be a great place for a Farmers’ Market or a weekend Flower Fair. Brown noted the park keeps busy during the summer.
“We think this is a neat park for the community and if done properly as we try to look at ways to try and increase sort of the cultural aspect of the community that it would attract younger families,” Brown said. “There is a lot of opportunity with not only this building, but the park itself.”