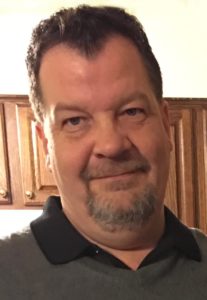 BENSCOTER, BRUCE ALAN, of Clarkston, passed away November 30, 2019 at 55 years of age. Bruce was born July 12th, 1964 in Pontiac, Michigan. Proud son, best friend and hunting/fishing partner of the late Larry Benscoter; beloved husband of Susan Benscoter nee Murray for 25 years; loving father of the late Steven Nagel and survived by children David Nagel, Vicki (Kyle) Hale, Colette (Christian) Benscoter and Aaron Benscoter; cherished grandfather of Cameron Hale, Benjamin Hale and Sophia Benscoter-McNutt; devoted father-in-law Stan Morley; dearest brother of Brian and Bill Benscoter; brother-in-law of Nathalie Jacobson and of Patty (Keith) Pascoe whom he referred to as his “sister-wife” because she was always there for him; proud uncle of many nieces and nephews. Bruce worked as a manager of operations for FedEx for over 10 years. He married the love of his life Sue; she was loyal and stood by his side until the day he took his last breathe. His children always spoke highly of him, stating he was a hard worker and the greatest man and dad they will ever know. He will be deeply missed by his family and friends. Arrangements entrusted to COATS FUNERAL HOME-WATERFORD. To post a condolence, visit www.CoatsFuneralHome.com.