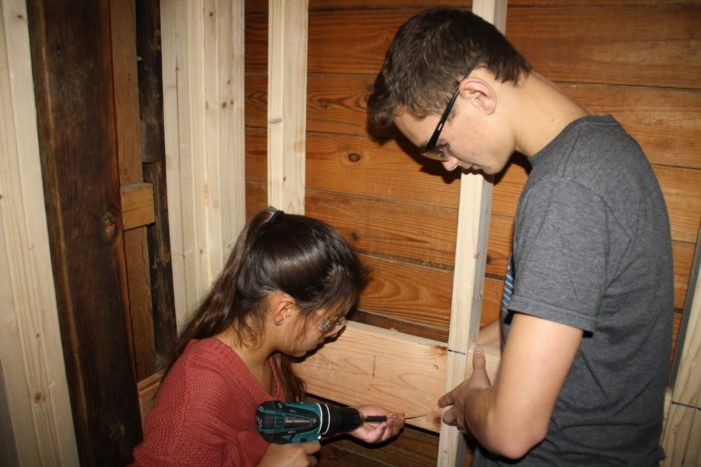 Clarkston’s Construction Technology Program’s first year is in full swing, volunteering to help with several building projects.
“What we want for the kids is for them to get some hands-on experience. There is a huge skills gap in America and it has not been addressed for a couple decades and we’re trying to help solve that problem,” said Construction Technology Teacher Steve Wyckoff.
These last few weeks, they’ve been doing work for Clarkston Family Farm and they’re expected to start work on the historic Sashabaw United Presbyterian Church in November.
“Lately it’s been just a couple days a week that we’ve come out to the field, the farm here,” said 10th grader Grant Mathews. “I’ve learned a lot in both places, in the classroom and out here, just because this is real work for a client, and then in the shop it’s more of what you can build for yourself.”
Mathews has spent the last two months in the construction tech program, and this is the first year it’s being offered in Clarkston schools.
“We have ninth and tenth graders this year, next year we’ll expand it to eleventh grade, and the year after that to the twelfth graders,” Wyckoff explained. “The class is a full year.”
He said students started off learning how to build in the shop and now they’ve been moving into the community to work on local buildings. They also get a math credit with the class.
“It’s brought me to realize the career path that I might want to take and I’ve realized that I’ve learned a lot. I’m really interested in this class and I have a lot of fun,” Mathews said.
Mathews has some experience in carpentry from working with his dad, also a carpenter, during the summers.
“I was already interested in this kind of work and then once I got in here and started learning even more and more, it really persuaded me to want to do it more often,” he added. “I enjoy the class a ton, I look forward to going to it every day and I’m excited for it. It makes me want to come to school.”
About 75 students are currently in the construction program, said Wyckoff, who was in the program himself at Clarkston High School in the seventies.
“We’re just trying to start getting the kids interested in the work force and maybe they won’t stay in carpentry, but they’ll somehow stay in the field, that’s really part of the goal,” he added.
Students are currently working on building a barrier free bathroom and wall framing at the Clarkston Family Farm.
Wyckoff encourages community members to contact him at the junior high if they have any ideas for local building projects for the class.