Capturing the thrill of the hunt 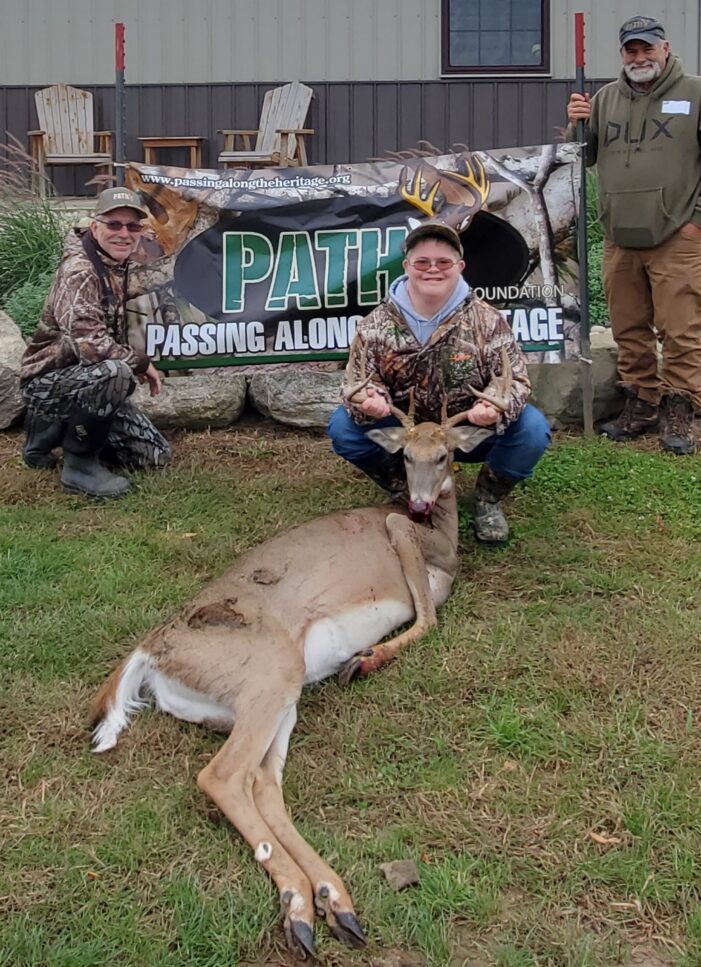 BY ALAN CAMPBELL
Special to the Clarkston News

Mitch Lyons may have found his niche with deer hunting.
Lyons, the son of Mike and Ruth Lyons of Independence Township, recently shot a 10-point buck through a hunt provided by the Passing Along the Heritage Foundation, known simply as PATH.
“I bought a crossbow, and he has a BB gun, but I’ve been building him up to shoot a gun,” Mike said. “I think today got him jazzed up.”
Lyons, who has Down Syndrome, is a graduate of Clarkson High School who now attends Renaissance High School.
Mike, who has been deer hunting most of his life, has been sitting with his son near a small food plot he planted on his four-acre parcel. They’ve seen does and fawns, but nothing they wanted to shoot.
“We just sit there and watch them come in and out,” said Mike. “I told Mitch, ‘If we see a doe with babies, we don’t shoot.’ I’m teaching Mitch about deer hunting.”
There was no indecision on Mitch’s part on September 23 at Double D Ranch near Clare. During a closed-fence hunt arranged through PATH, Mitch shot a buck of a lifetime with the aid of a mechanical device that aims a rifle with a joystick and video screen.
“Big deer,” said Mitch while putting his hands over his head to show how many points.
The hunting ranch was designed and built by Dennis and Kim Dobson with the thought of seamlessly providing barrier-free lodging. It opened in 2020.
“At Double D Ranch, we have a strong passion for hunting and the outdoors,” Dennis Dobson said. “We want to make sure everyone who shares this enthusiasm has an opportunity to make their dream a reality.”
Consequently, PATH and Double D work their dream-come-true magic at a place that welcomes people with a wide variety of needs from the veteran carrying post-traumatic stress disorder to young people shy around strangers.
Some 16 hunts were sponsored in September by PATH.
“We all get more out of helping people than we could ever give,” said Bob Knoop, PATH president and a retired hunting and fishing guide. “The support we receive is beyond belief.
“Every year, we sell out our banquet and raffle, and organizations such as the Abrams Foundation are there to help.”
“I didn’t know much about PATH, but the whole experience was unreal. Beautiful people, beautiful place, very accommodating,” Mike added.

PHOTO: Mitch Lyons, of Independence Township, will never forget his first buck, which was shot through a guided hunt provided by the Passing Along the Heritage nonprofit organization. He’s shown, middle, with his father Mike, left, and PATH president Bob Knoop. Photo provided