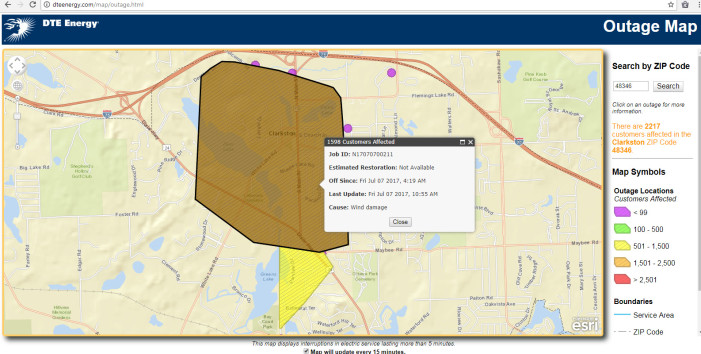 Well, it is  mid morning, Friday, July 7, 2017 and if you are one of the lucky locals without power, you are not feeling so lucky. According the DTE Power Outage maps, wind from last night’s storm is to blame. Take a peek at the maps for the number of homes/businesses affected. Drop us a […]

This just in from Oakland County’s road commission: Canadian National (CN) will close the following locations to through traffic today (Apr. 25) at 10:30 a.m. for emergency railroad crossing repairs: The first closure is Rattalee Lake Road between Terrace Road and in Eaton Road in Rose Township.  The detour for the closure is Terrace Road […]

We are sad to report Roy “Pops” Warner has passed away. Coach Dan Fife shared “every day was a good day with Pops. He always had a smile.” What will you always remember about Pops, as a Clarkston teacher? As a coach? Do you have a fun picture?  Please write a comment and share. We […]

This is in Waterford, but still close enough to share for our road warriors: Consumers Energy has closed the eastbound outer lane of Walton Blvd. between Clintonville and Silver Lake roads in Waterford Township for concrete repairs that are the result of an earlier gas main break.    An eastbound lane will remain open to traffic in […]

Get ready drivers. On Clarkston Road, from Clearview to east of Lakeview Road, Smith’s Waterproofing will add “High-friction surface treatment on curves” by Walters Lake. This involves “application of an epoxy and aggregate to road surface providing better traction control,” according to a press release from the Road Commision for Oakland County. The road will not […]