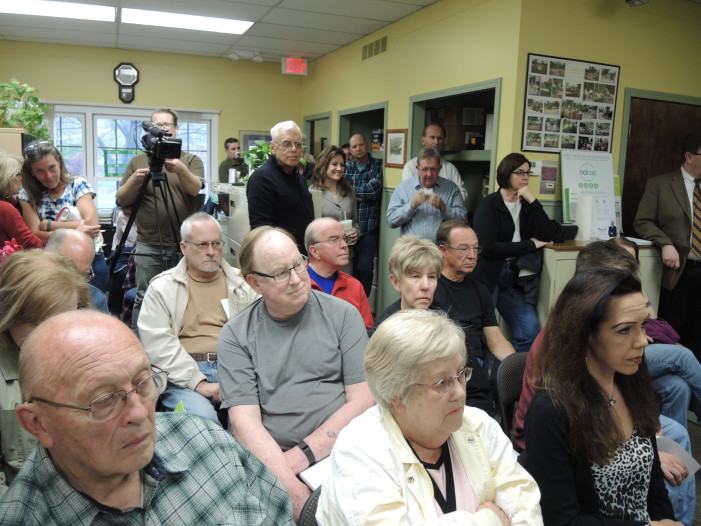 Bids come in too high
for city council support

City hall was standing room only, including the side hallway leading to the exit as city council discussed four bids to build a three-bay addition to the north side of the building.
Several residents were outraged at the bids, which came in more than $100,000 higher than expected, and had peppered the city with signs calling for “No DPW expansion, spend tax dollars wisely.”
City Council members agreed, and were unanimous in their rejection of the bids.
“The bids came in way over what was anticipated,” said Mayor Joe Luginski at Monday’s special meeting. “I’m not sure how we had such a big miss. It’s kind of upsetting we’re in this position tonight.”
Council member Michael Sabol said the bids were not even close.
“We were paying $1,650 a month for the DPW building up on 3 E. Church – anything we build can’t cost us, in my opinion, more than $1,600 a month, period,” said Sabol, who made the motion to reject the bids.
Bids were received from Usztan LLC of Auburn Hills, $479,000 base bid, plus $120,000 for interior office work; Cedroni Associates, Inc. of Utica, $498,000 base bid, $114,000 interior office; Bernco, Inc. of St. Clair Shores, $538,000 base bid, $111,000 interior office; and Heritage Contracting LLC of Independence Township, $538,500 base bid; $150,500 interior office.
A loan analysis to borrow $500,000 estimated a total with interest of $624,150, with an annual payment of $62,415.06, or $5,201.26 a month.
City engineers previously estimated the project at $335,785. Council member Al Avery wanted to know why the estimate was so far off the mark.
“I had a sense this was coming,” said Avery, who voted on April 11 against sending the project out for bid. “How did you not know – this is so far out of whack. Why did we bother to bid it?”
Project architect James Renaud, president of JFR Architects of Sterling Heights, said contractors are busy this summer and can name their price.
“Construction is good right now,” Renaud said.
The project is also in a difficult location, he said.
“Anything you do on the north side of the building will block off current drainage – even if you put a Home Depot shed on the side of the building,” he said.
All the contractors said the building site is tight and difficult to move around in efficiently, he said in his report to the city.
“The loss of efficiency in their labor added to the construction schedule and cost,” he said.
Resident Chet Pardee asked for clarification of whether the Clarkston Historic District Commission granted approval to the project.
Discussions at previous council meetings indicated it had, but at the historic commission’s May 10 meeting, HDC Chair Cara Catallo said that wasn’t the case.
Catallo, who was at the council meeting, said the commission gave its unofficial approval.
“People come to the HDC to make sure they’re on the right track,” she said. “The HDC, informally, saw no problem with the specific plan – we didn’t see anything raising a giant red flag.”
Also, city hall is a “non-contributing structure,” meaning it does not contribute to Clarkston’s historical integrity, she said.
Resident Karen Eckert, who previously called for the city to consider one-bay, two-bay, and other options, said the project should go back to the drawing board.
Sabol said they need more input, but the process is working.
“There are people who do believe there were backdoor deals and other things going on here,” he said. “People thought it was a foregone conclusion, no matter what the number was. I think we’ve proven that not to be the case today.”
Luginski said he will reconstitute the city Facilities Committee to review the project, which is still needed to house DPW equipment and city records.
“Absolutely we have to regroup,” he said. “Over next couple weeks we’ll figure it out and start the next committee – if anyone is interested, let us know.”

city hall expansion, City of the Village of Clarkston, DPW