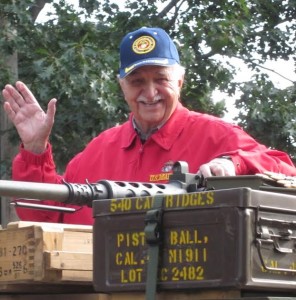 Clarence Edward Johns, was born in 1925 in Cuyahoga Falls, Ohio.  He was the third youngest of nine children that lived in a two-room house with no indoor plumbing.   Clarence (Clancy) had to share pairs of shoes with one of his brothers in his early life.  He had dreams of becoming a professional baseball player, but joined the Marines in 1942, at the age of 17 and went on to fight for his country with the 3rd Marine Division in battles for Guadalcanal and Iwo Jima.

After the war ended, Clancy used the GI Bill to put himself through college with a degree in Civil Engineering from Ohio State University, and even get a pilot’s license while he was at it.  He got a job with Northrup in California, but after working for the Government contractor for a few years, he returned to the Midwest and started Industrial Building Panels (IBP) in Troy, Michigan.  He continued with that commercial business until the day he passed away.

Clancy married Clarkston native Patricia Kathryn Tisch in 1958 and they had two children, Patrick and Ann who still live in the area.

Clancy was beloved by many for his generosity and friendliness.  He is survived by his two children, Ann Johns Gregg and Patrick Edward Johns; grandpa of Kathryn Ann & Janet Marie. Also survived by younger brother, Robert Johns.  Clancy passed away at Henry Ford Hospital in Bloomfield Hills in the late evening of Memorial Day.  He will be buried with military honors at All Saints Cemetery in Waterford on Saturday, June 4th at 1:00 pm. Arrangements entrusted to Lewis E. Wint & Son Funeral Home, Clarkston.  Please leave a memory on the online guest book at www.wintfuneralhome.com

In lieu of flowers, donations may be made to SuitsforSoldiers.org.