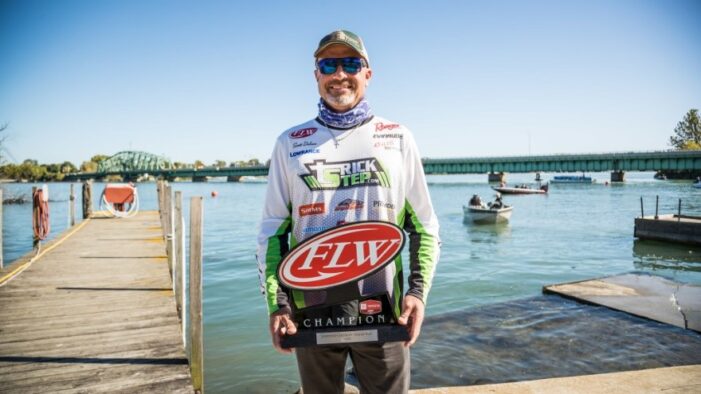 Clarkston resident Scott Dobson is a professional fisherman and showcased his talents over the September 18-20 weekend on the Detroit River.
Dobson brought a five-bass limit to the scale on Sept. 19 weighing 18 pounds, nine ounces to win the three-day Toyota Series event in Trenton. His three-day total of 15 bass weighing 59 pounds, three ounces earned him the win by a one-pound, seven-ounce margin over second-place angler Troy Stokes of Brownstown, and earned Dobson the top payout of $27,534 in the third and final tournament of the 2020 Toyota Series Northern Division.
Dobson said he caught fish on more than a half dozen baits and weighed fish from the mouth of the Detroit River near Erie to the mouth of the St. Clair River in St. Clair.
“I appreciate them making the call to keep us all in the river day one and two, I don’t think I’ve ever fished 16 hours in the Detroit River in two tournament days,” said Dobson. “I grew up here in Trenton, I see a lot of Trenton people here, (and) it’s awesome to win a big tournament out of Trenton.”
Dobson’s main players were moving baits.
The first two days, Dobson targeted fish in the river, catching a few off a rock pile on a flat, but catching most of his fish in current on the faces of points and breaks. In some places, he threw the umbrella rig, and on other spots, he slow-rolled the spinnerbait in water as deep as 15 feet.
Dobson started in the river on a community hole at the mouth on Saturday, some shallow rock and a couple of deeper current spots. Then, he burned up to the mouth of the St. Clair River.
“I knew it was still going to be rough, but I wanted to get three in the box,” Dobson said. “I knew there was another tournament up there, and I wanted some fish in the box in case I got there and couldn’t get on anything or they had snatched a few.”
Once in St. Clair, Dobson got on a spot at the mouth of the river that was loaded with fish, but they were barely catchable for him. His first cast produced a four-pounder, he broke off another on the next cast, and then failed to catch any quality the rest of the time. So he headed back down into the river.
“With five minutes to go, I caught a four-pounder,” said Dobson. “I slow-rolled the spinnerbait up the face of a point, probably 12 feet down, and she hammered it, and then I came in.”