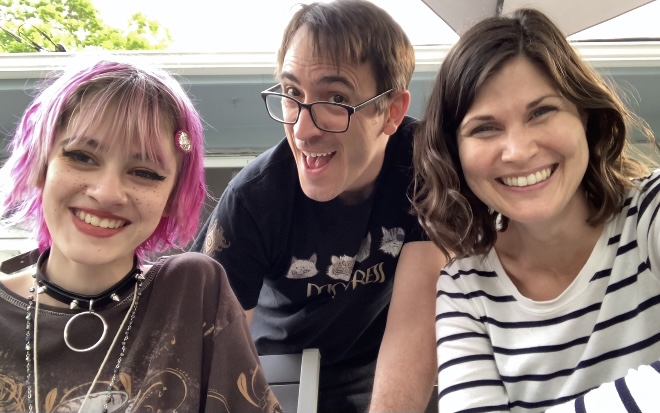 For Truly Render and Shaun Manning, quitting their regular day jobs to start up a bookstore was stepping out of the comfort zone, but the Clarkston natives and Clarkston High School graduates are hoping the change in careers can lead to more success and opportunity.
With the upcoming of Booksweet, located in Ann Arbor, the couple said it’s the realization of many years of planning.
“We’ve been dreaming of owning a bookshop for over 15 years,” said Render, a 2000 CHS graduate. “Reading, writing, and creating community connection through creativity have always played a really important role in our lives.”
“When an opportunity presented itself to bring our bookshop idea to life, we stopped daydreaming and started researching, consulting our networks, and doing a lot of math,” added Manning, a 1998 CHS grad. “Many spreadsheets later, we felt good about the shop as a viable option for our family. And it’s been a sustained, exciting hustle from there.”
Render and Manning met through the CHS Drama Club more than 20 years ago.
“I wrote and directed a little one-act play for Theater-A-Thon and cast Shaun as my husband,” Render said. “I kept things professional until our performance was over. Then, a few moments after the curtain closed, both of us still in chalky stage makeup, I asked him out on a date. That was in 1998. We’ve been together ever since.”
Growing up in Clarkston, Manning and Render cited Jeffrey Tice, Michael Petersen, Richard Swartout, Linda Denstaedt, and David Bihl as influential teachers in the district.
“We’ve lived in Chicago, New York City, Glasgow and now, Ann Arbor,” Manning said. “It’s been a great life together, soaking up countless plays, art happenings, and book events. It’s funny how it all started in the old high school by the backstage door.”
Both of their families still in Clarkston, the family, which also includes their child Raymond, visits often.
“It’s been great to see the ways in which downtown is evolving,” said Render. “Shaun and I remember when the Village Bookshop was in Downtown Clarkston. We loved that shop. I still have an old bookmark from there. With all the eateries and happenings on Main Street, I think a reprise of the Village Bookshop would actually do really well.”
“Clarkston was really a formative place for us in a lot of ways,” Manning noted. “It’s not a perfect place by any stretch, and no place is, but there were some really interesting teachers at CHS who were genuinely invested in teaching their students how to question the world around them and define success for themselves. Those skills have played an important role in our careers and in creating vision for Booksweet.”