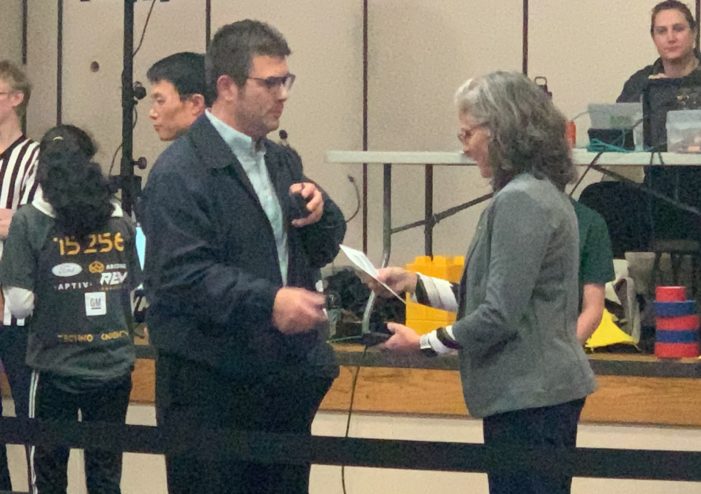 It was a milestone night at Springfield Plains Elementary, Nov. 6, as the first-ever FIRST Tech Challenge robotics competition was played out in Clarkston.
Middle school and junior high teams from across the county, including teams from Clarkston schools, took part in the event and this year’s game, FIRST Skystone.
“It’s just great exposure and to let the community see a lot of what we’re doing,” said Clarkston Robotics Director Kyle Hughes. “Robotics is hard because when we compete, we’re always out of town, so far away, and people don’t get to experience what we are all about. Having our FIRST Tech Challenge here allowed the community to come in and see how incredible and how cool this robotics thing really is. It’s such an amazing program and what it does for these kids is amazing.
“Having Clarkston be able to host a tournament this year kind of blew my mind. This was the only gym that was available in the entire district between now and the window that we had in order to do this. It is actually small, but we made it work because we really wanted to host this.”
The gym at Springfield Plains was packed all night and parents were seen recording videos with their phones to savor these special moments.
“I think it’s awesome,” said Hayden Simmons, a ninth grader at Clarkston Junior High who is a member of the Clarkston Robo Wolves robotics team. “We are always trying to give outreach to this community and provide service to those who wish to compete in this excellent competition. I think hosting this was a good idea and so many people took time out of their schedules to do this, like the Team RUSH (high school) students, who volunteered their time to run this.”

Prior to the competition starting, Borg Warner Global Program Manager Todd Ferguson presented a check in the amount of $7,500 to Hughes to help offset season costs for the entire program.
“(The donation) has been yearly, but the reason it was so big tonight is because they cut back on the funding,” Hughes said. “Todd was able to work with people at Borg Warner to understand the importance of supporting programs like this. With the things we do and to continue in the community, there is always some need for money. We also run the (Clarkston) Holiday Lights Parade and do other things, too.
“Money like this allows me to do things with these kids so other kids can get exposure (to robotics).”
Hughes noted that in recent years, the robotics program has grown “exponentially.”
“When I first came here, Team RUSH had 13 kids on the team, and we are now up to 41 kids,” she said. “We had two FLL (FIRST Lego League) teams (for elementary students) and we now have eight FLL teams and 19 Junior FLL teams that feed into that and eight FTC teams. Every year, it keeps growing and growing, and having exposure like tonight here in Clarkston, ideally, I think every kid in Clarkston should have some sort of robotics experience where they can be competitive, but not in a physical way. They can be competitive with their mind.”
Moving forward, there is a healthy dose of robotics events on tap, according to Hughes.
“We have more of these OCCRA (Oakland County Competitive Robotics Association) tournaments coming up, including one in Lake Orion,” Hughes said. “Two of our FTC teams have already qualified for States, so that’s really exciting. Our FLL teams are just starting to go out to tournaments, so there are a lot of tournaments between now and the second week of December.”