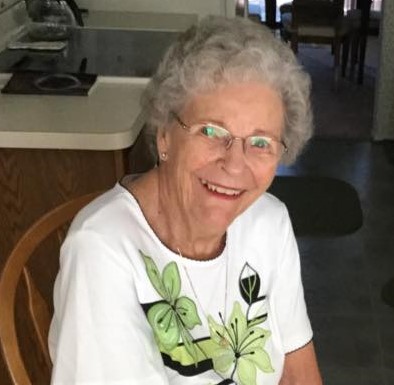 Clarkston shed tears as a community last week upon hearing the news Barbara Gibson passed away on Oct. 11.
Gibson retired from Clarkston Community Schools after a long career as an English teacher, but is probably best known in the community as “Ma” Gibson, the theater director of over 30 student musicals and plays at Clarkston High School.
“Barb Gibson was an icon and she worked extremely hard and she was a master of getting the most out of everybody,” said Mel Vaara, former Clarkston assistant superintendent of schools.
That sentiment was voiced by many people on Facebook.
“Ma meant so much to me,” said Dawn Woodward. “I truly felt like I belonged when I was in theater. My best memories of high school revolve around the culture and hard work she created, and I’ll never forget her joy when the (Detroit) Tigers won the World Series in ‘84.”
Gibson’s son, Kirk, was, of course, on that Tigers team.
Barb Gramann wrote, “Mrs. Gibson’s enthusiasm for the arts will live on through the many students she impacted throughout her career.”
“Another CHS icon who will be missed, so blessed to have spent one hour a day 1982-85 in her class where she gave us all confidence and the best preparation for college level speech and debate, “ wrote Dana Litherland.
Beth Adams added, “I loved her smile. She had a way of making you feel special…as if she truly was ‘Ma.’”
Gibson’s love for the theater came from her mother, according to her daughter, Tina. Gibson’s mother was instrumental in founding the Lansing Civic Theatre.
“My grandmother and my mother were two peas in a pod about theater,” said Chris “Tina” Nielubowicz.
Amy Seaman, current CHS theater manager, was a student of Gibson. She reminisced Gibson came to all the current high school productions and would sometimes speak to the cast.
When Seaman was in high school, she recalled Gibson expected her students to work hard.
“High school is a difficult age, but you felt welcomed and cared for in the play production,” said Seaman. “We spent more time in school during rehearsals than at home; it was your second family. I truly felt ‘Ma’ believed in me. She was so approachable. The play production was never about her. She was selfless.”
Seaman noted many of the current traditions in the theater productions were instituted by Gibson. Clarkston High School is International Thespian Society Troop #803, initiated by Gibson.
Daniel Travis, 1986 graduate of CHS, said, “Ma was an amazing human being. She knew the craft and art of acting. She was proud of us. She was a great communicator and incredibly passionate about the theatre. I learned many life lessons from the late Grace Warren, retired chorale teacher, Cliff Chapman, former band director, and Ma. I’m who I am today because of those teachers.”
Travis has acted in many television and movies, and teaches acting in California. He has a vivid memory of Gibson sitting with him and desperately helping him understand Shakespeare verse. She later visited him in Washington D.C. when he was acting in Shakespearean theater.
Current CHS Chorale Music Director Michael Peterson, recalled how he worked with Gibson.
As a junior in high school, he was on the varsity basketball team. He was also interested in music and Gibson recruited him for the production of “Kiss Me Kate.”
She asked him about doing a role in the play. He countered he was on the basketball team and they had practices. She let him know then-basketball coach Dan Fife had been her student and she would talk to him.
Gibson and Fife made a plan with Peterson so he could play basketball and be in the play. The following year, he made a decision to give up athletics and move to the arts.
“Gibson told me I could make the decision,” Peterson said. “She was a helpful mentor. I learned from ‘Ma.’ She knew how to be stern, and she knew how to care about people. It was up to you to be the best you could be.”
Chapman worked with Gibson for 15 years, said, “Everyone felt you were the most important person to Gibson.
“Musicals were incredibly challenging and maybe the most challenging was ‘West Side Story’ because of the number of male actors needed. Gibson would pick the plays a year in advance. Then, auditions were in the fall, with practice starting after the holidays, and the play was put on in March. We were a foursome that worked together – Gibson, Warren, teacher Nancy Aldyn, who did the choreography for the plays, and myself. It was a community event in those years.”
Bob and Dodie Beattie owned a furniture store on Dixie Highway and Gibson’s daughter.
Tina recalled Gibson would stop by and pick out the furniture needed for the set and the Beatties would deliver it all to the high school.
“Gibson’s personality brought together a high degree of commitment by the students,” said Chapman. “Gibson was a master at pulling off collaboration and cooperation and had all the parts working together and everyone did their best for her. She was their biggest fan.”
Gibson was preceded in death by her parents Harold and Elva Schell, of East Lansing.
Beloved mother of Jackie (Roger) Price, Chris (David) Nielubowicz, and Kirk (JoAnn) Gibson.
She was the grandmother of Jessica (Blair) Cameron, David (Wendy) Nielubowicz, Scott (Rachel) Price, Brent (Greta) Nielubowicz, Emily (Brad) Walling, Colleen (Kevin) Letcher, Kirk Robert (Skylar) Gibson, Kevin Gibson and Cameron Gibson, and great-grandmother of Isabelle, Danielle, Miles, Zack, Eva, Riley, Reece, Olivia, Gabe, Lucy, Rocco, Owen, Reid, and Rosie.
For the full obituary, see the October 14, 2020 edition of The Clarkston News.