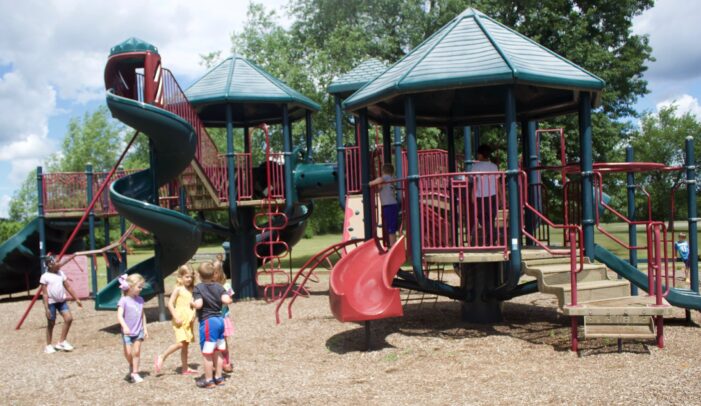 As part of Governor Gretchen Whitmer’s stages of opening back up the state of Michigan, community parks are now open.
The Clarkston area is home to people of various ages, including young children. After being confined to their homes since early March because of the Stay Home, Stay Safe order, visiting parks is now in high demand.
Many parks are within the community. The most popular being Depot Park in downtown Clarkston. Two more popular spots are Clintonwood Park and Sashabaw Plains Park.
For most children, it is hard to comprehend the concept of social distancing. A virus so complex like COVID-19 is also hard to understand and can be scary in the mind of many. Once being released to a place that is supposed to be a safe haven full of enjoyment, it’s hard to want to contain a child from being just that – a child.
While visiting the parks, many parents and supervisors spoke about their worries and cautions they took in returning to the parks. For obvious reasons, this was most people’s first time being back to the parks, and there was a large consensus from most that sanitizing was a self-enforced requirement done before and after leaving the park.
Clarkston resident Katie Hart and her daughters visited Depot Park with her mom and sister Madeline Shiff, who also has young children.
They shared they felt very comfortable bringing their kids to the park knowing they had previous conversations about not touching their face or other children and trying to keep some distance.
Shiff shared since she has a young baby, she also brought sanitizing wipes to wipe down swings and other objects she may play with.
At Sashabaw Plains Park, there was a group of 18 kids from a summer camp with Lil’ Peoples’ Place, down from the normal 75 the daycare usually has.
The two staff members at the park were wearing masks, especially when serving food for their picnic.
The kids are required to wash and sanitize their hands frequently before and after eating and while on the playground.
Prior to letting the kids onto the playground, staff wiped down slides and handrails on the play equipment in order to let the kids have free range of the park.
As a whole, the community seems to be doing well in adjusting to the “new normal” while practicing safety measures for themselves and others.