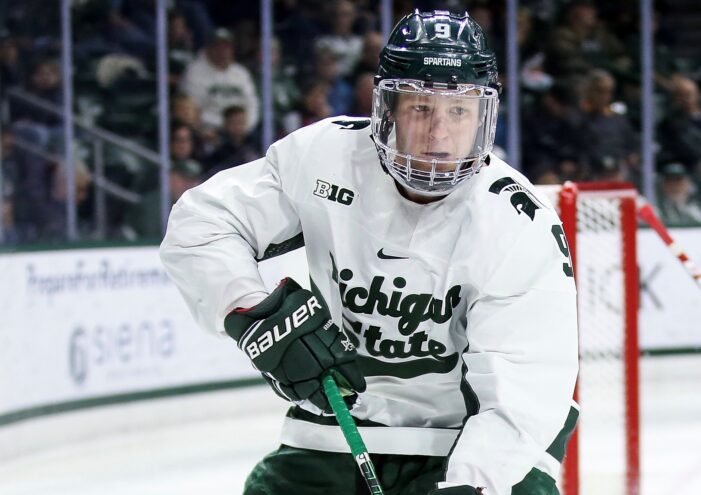 Mitchell Lewandowski left Clarkston before his senior season to play junior hockey in the United States Hockey League back in 2015.
That exposure in the USHL led to Lewandowski coming back to his home state in 2017 to play NCAA Division I hockey for Michigan State University.
“Growing up, my dad’s side of the family was really big into hockey so I was just thrown into it at a young age,” said Lewandowski, who attended Bailey Lake and Pine Knob elementary schools, Sashabaw Middle School, Clarkston Junior High, and three years at Clarkston High School. “I really took a liking to hockey and being on a team and everything that comes with it and I haven’t looked back since.”
At the end of the 2019-20 season, Lewandowski was tabbed Big Ten Honorable Mention for the third straight season after recording eight goals and 20 points in 34 games for the Spartans.
“We had a great year, and we sat at first place in the Big Ten at one point in time during the season,” Lewandowski said. “We had a great group of guys who were all in to making something happen this year.”
An advertising major, Lewandowski is gearing up for his senior season in East Lansing.
“Absolutely looking forward to next season,” he said. “In past summers and offseasons, I’ve had to repair my body up a little bit with injuries, but this summer will be my first in a long time where I’ll be able to really work out and be ready to go for the start of the season.”
Next season, MSU will play the USA Hockey National Under-18 Team in an exhibition game. Team USA features Clarkston native Ty Gallagher, a University of Notre Dame commit.
“It’s funny because I had Mr. Gallagher as a teacher in high school for one of my PE classes and we always use to talk hockey and he’d tell me about his younger son who was playing,” said Lewandowski. “Fast forward to now, and it’s Ty. I’ve been following Ty for a few years now. He’s an awesome defenseman and super talented, so I’m excited to see how his future plays out.”