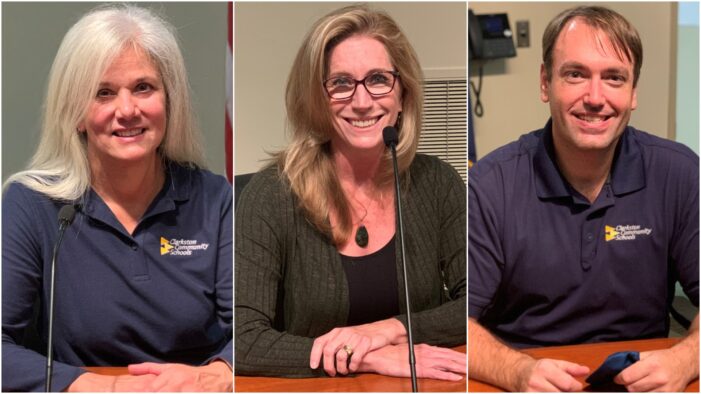 As Clarkston Community Schools’ daily routine changes seemingly on a daily basis, the district’s Board of Education has been on its toes since March in discussing and weighing options moving forward for the students and staff.
As much of the attention last week was on local elections, board members Kelli Horst (current president), Elizabeth Egan (treasurer) and Steve Hyer (secretary) ran unopposed and were elected to new six-year terms.
All three, who join Trustees Andrea Catalina, Stefanie Crane, and Cheryl McGinnis, and Vice President Greg Need, agree serving during the time of a pandemic has been far from normal.
“The biggest challenge is dealing with all the things the pandemic has made us deal with that don’t allow us to deal with the important, big-picture items that we’re focused on as a district,” said Hyer. “We’re constantly dealing with health regulations changing, what schools are in and out, communication with parents and staff, and trying to be a cohesive leadership team when we can’t really sit down next to each other and work it out.
“We’re dealing with things as they come at us, and we haven’t lost sight of our vision, but we were at a point in February where we were talking about all those things, where we want to be as a district, what are our priorities, and how do we bring together the components that take care of all of our kids and all of their needs so they can grow and learn, become great people and achieve their dreams.
“Now we’re in a pandemic, and none of us has done this before, and the science is coming out. What we knew in March is different than what we know today. We’re doing everything we can to make it work. We’ve been transparent and straightforward with our community, and I think we’ve done some great things for kids.
“There is a lot that goes into everybody’s personal actions right now, and collectively, people want to be done with the pandemic, but unfortunately, it’s the worst it’s ever been right now.”
Hyer, also the president-elect for the Michigan Association of School Boards, will be starting his sixth term on the school board, Horst and Egan their fourth.
Horst has embraced her role on the school board, even with hurdles and obstacles along the way.
“It’s funny, but I had a lot of people come up to me over the summer and say, ‘I bet this isn’t what you signed up for,” said Horst. “And I would laugh because I thought, ‘Well, I’m an elected official. This is exactly what I signed up for.’ I said that to our staff on opening day, virtually of course, but that, to me, hasn’t bothered me. This is the role I’m in and this is what the people expect of me. We’ve been hearing from a different group of people who have been frustrated at times or upset at times or happy at times, kind of depending on where we’ve been at different points since March. We all understand people’s frustrations, and I think we’ve done a good job responding to those frustrations, certainly in our meetings letting people speak to us and vent to us those frustrations.”
Horst also touched on how the aspect of virtual or distance learning has been a detriment to some students.
“We heard a lot in the spring about recognition of where students are and what they lose for their academic growth,” said Horst. “Right now, we’re going through our first round of testing to measure that. I’m very interested to see what that new baseline will be, where our students are, and how we are really really going to hammer in on where we are going to focus on that, and try to get those students back. We know gaps that existed before have been exacerbated by this extended time away from a normal school routine.
“That’s really where I hope we can spend some focus. We want to talk about it. We want to focus on it. I know our teachers and staff do as well.”
Egan noted with a solid group of board members comes an aspect of positivity for the Clarkston district.
“We’re all incumbents and we’re a very mature team that has worked together,” Egan said. “This is a real positive for our community, our kids, our staff and our administration. I think we’re in the best place we can possibly be in terms of trying to manage the whole COVID environment as well as academics having real fidelity, making sure we’re delivering academics as best as we possibly can and making sure the kids are getting it.
“My concern is with families and all the switching we’re doing. As well, who would want to be a guest teacher right now? No one. We need to keep communicating as much as we can with the parents because I’m sure they are struggling when the kids are home and maybe not being able to work if child care is an issue. The mental health of our community and everyone, we don’t want that to become an issue, and that’s why we are continuing our food service program.
“We’re all in this together and we just have to have the attitude where our board feels very committed as a team and we certainly want the community to feel the same way with us. We can’t control the virus other than doing what we are already doing.”