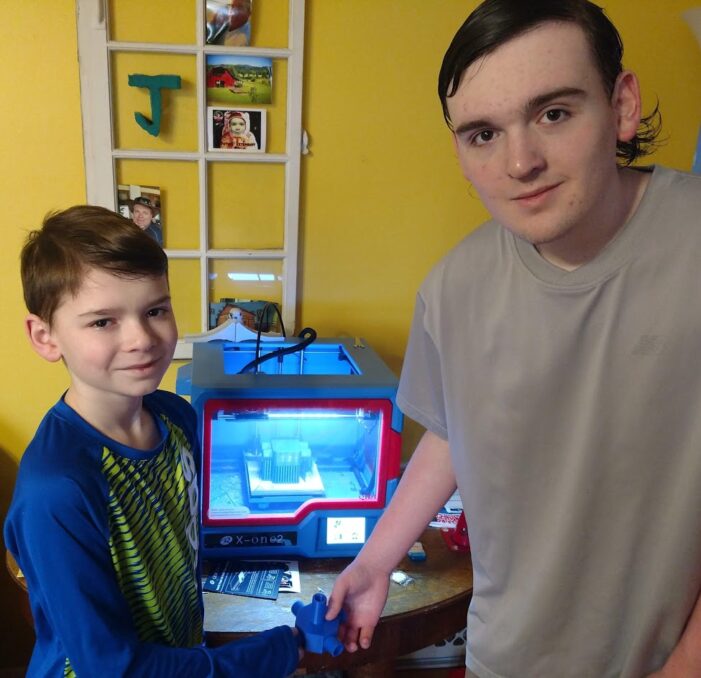 Jonah Robbins and Joshua Robbins show off their 3-D printer that they have used to print ventilator parts. “They hope they can do more,” said their mother, Jennifer Futrell Evans.

While online schooling is the norm these days during the COVID-19 crisis, many students are using home printers for their schoolwork.
Jonah Robbins and Joshua Robbins are using their 3-D printer to create parts for ventilators, which they are donating to local hospitals.
“Our mom posted a few of the figures we have printed on social media,” said Joshua Robbins, a sophomore at Clarkston High School. “(Local ER nurse) Kim Visintine knows we have a 3-D printer and contacted our mom (Jennifer Futrell Evans).”
“We really don’t know much about the parts,” added Jonah Robbins, a sixth grader at Sashabaw Middle School. “We were given a print and we made a few adjustments to make it work on our printer.”
Both boys have secondary schooling aspirations to go into engineering, robotics, or something technical.
“The boys are really good about the concern of others and I think they work hard at being good citizens, so when asked if they had the ability to prototype this for a local hospital, they did it, Evans said. “They hope they can do 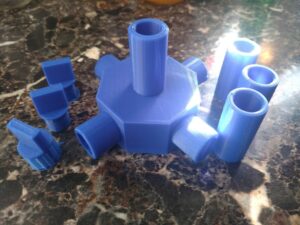 more.
“Once they were able to get the print to work properly with their printer, it was just a matter of print time and how much filament we had on hand. There are nine pieces to this particular prototype, and it took about 14 hours to run them all. They had to tweak it a bit and it took a couple of runs to get it right.”
Evans added that making the prototypes isn’t all that it may seem to the casual observer, however.
“This entire process was much easier than one would think,” she said.
The back story to all of this, according to Evans, is that last Christmas, her husband, Stanley Evans, bought the boys the 3-D printer hoping to encourage their interest in manufacturing and enginering.
Mission accomplished.
“They have had a great time printing characters, and I have been posting them on social media,” Evans said. “The boys are more than willing to print anything they can to help.
“And I like to think that it gave them something to do and think about.”
Stanley Evans owns a manufacturing company, SJS Machine, LLC, which is located in Tennessee.