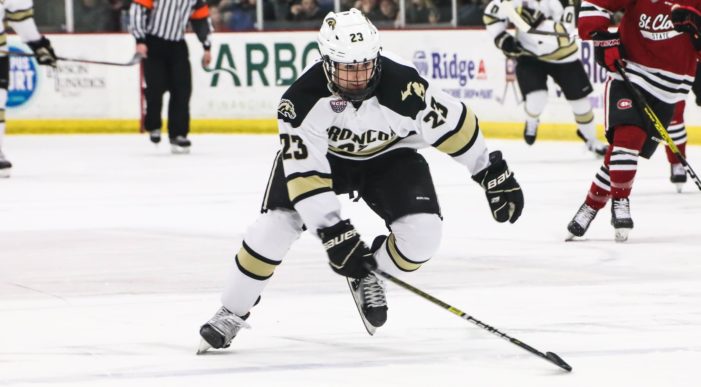 It wasn’t easy for Clarkston native Paul Washe to digest the situation when the NCAA canceled the rest of its winter and spring sports seasons last month due to coronavirus precautions.
Washe, a junior forward on the NCAA Division I hockey team at Western Michigan University, was having a career year with 12 goals and 21 points through 34 games.
And the Broncos were gaining momentum at the right time of the season with the NCAA Tournament on tap. If the season had continued, the Frozen Four was set to be played April 9 and April 11 at Little Caesars Arena in Detroit.
“Like a lot of other teams, we’re disappointed,” said Washe. “We definitely felt like we had a chance to do something special. We’d like to still be playing.”
A finance major, Washe is now finishing up the semester online with Michigan college campuses shuttered to hopefully stop any more outbreaks of the coronavirus.
“The first few weeks have gone really well,” Washe said. “The professors at WMU have done a great job helping us with the transition.”
His first two years in Kalamazoo, Washe was named to the NCHC (National Collegiate Hockey Conference) All-Academic Team, in addition to being named the NCHC Distinguished Scholar Athlete as a sophomore. His freshman year, Washe tallied five goals and eight points in 29 games and then increased to four goals and 11 points over 33 games last season.
Playing for former NHL coaches Andy Murray at Pat Ferschweiler has been a bonus for Washe.
“I’m lucky to be at a program that emphasizes player development,” said Washe, who turned 21 last November. “We have great coaching and great players that push each other to be better every day. It’s been an unbelievable experience. (Murray and Ferschweiler) are true professionals that know what it takes to be successful in hockey and in life.”
Prior to enrolling at WMU, Washe played two full seasons of junior hockey in the United States Hockey League, splitting time between the Tri-City (Neb.) Storm and the Fargo (N.D.) Force. He left home in 11th grade to play for the Storm and that season helped get him the exposure needed to play NCAA D-I hockey.
“I was excited to leave because it was such a great opportunity to grow as a hockey player,” Washe said. “I got to play with and against great players on a daily basis. I made the decision to commit to Western the summer after my first year in the USHL. I followed the program growing up and was really impressed with the school on my visit.”
Getting his start playing hockey at Lakeland Arena in Waterford, Washe advanced to the AAA youth ranks with Belle Tire, Little Caesars and Victory Honda before landing in the USHL.
He noted that with more and more high-end hockey players – and athletes overall – coming out of the Clarkston district that it is a testament to the resources available in town.
“Hockey’s a small world,” Washe said. “It’s great to see more and more players from Clarkston having success. It’s a credit to the community and the opportunities Clarkston provides all athletes.”
Growing up, Washe, the oldest son of Paul and Lori Washe, went to Springfield Plains Elementary, Sashabaw Middle School, and one year at Clarkston Junior High. He earned his diploma online from Clarkston High School. He said his favorite highlights from those early school years were fourth grade with Mr. (Matt) Gifford (now SPE principal) and gym class with Mr. (Lars) Covintree (now at CHS) at Springfield Plains.
“My brothers (Tim and Luke) and I loved growing up in Clarkston,” said Washe. “We have great memories and great friends from Clarkston.”
Tim played junior hockey this past season with the Nanaimo Clippers in the British Columbia Hockey League and is committed to play at WMU, starting school either this fall or in 2021. Luke is a sophomore at Brother Rice High School and plays on the Warriors hockey team.
After this semester, the oldest Washe plans to stay at Western Michigan to train and take classes this summer.