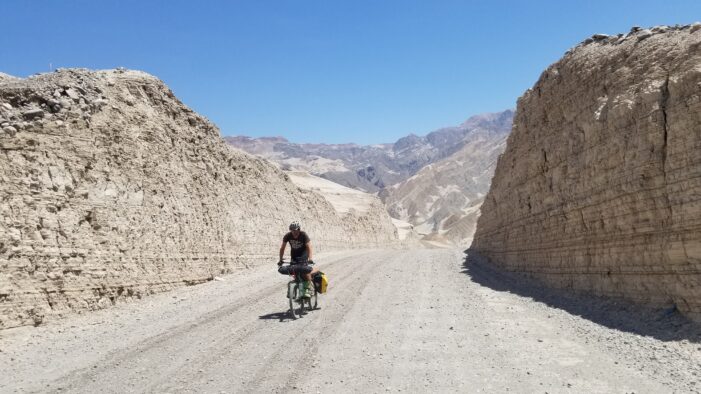 BY PHIL CUSTODIO
Special to the Clarkston News

A two-year, 20,000-mile bike ride from Alaska to Argentina has come to a close for Chris Haag of Clarkston and his wife, Sophie George
“I’m looking forward to seeing my dog, and there is something appealing about not having to find a place to dig a hole every time I need to go to the bathroom or check my shoes for scorpions in the morning,” Haag said.
The trip was cut short by Argentina’s Coronavirus lockdown in March before they reached Ushuaia, the southernmost tip of South America.
“Throughout the whole trip, I’d thought about the last day, last kilometer, and last moment countless times,” Haag said in his online blog. “At first I imagined blue skies and a brisk south pacific autumn chill in the air. Arm hairs standing up with little droplets of water forming on them. We’d probably skip taking a picture in front of the Ushuaia sign because we’d heard there is usually a line of tourists and after two years of cycling that wouldn’t seem like the memory I wanted to have from that day.”
But the U.S. State Department issued a statement for anyone abroad to come home or be prepared to stay in place indefinitely. It was a difficult decision, but they decided to box up their bikes and equipment for the trip back to the Northern Hemisphere.
“I stopped and looked at my bike. Broken spokes, rust, scratches, dents. My leather saddle, which had aged from a golden light brown to almost black, all of its rigidity lost and looking like it would collapse under my weight. My front fender had broken off,” he said. “My body didn’t feel much different. But I knew both could finish the journey if given the chance.”
They found Argentina completely different from the rest of Latin America, with a major immigration boom from Europe in the last century, so the population and lifestyle felt more like Spain or Italy.
“Our diet switched from lentils and veggies to ravioli and cured salami. The wine is great, the people are friendly, and everyone sleeps from noon to six,” Haag said. “The northern part of the country is similar to the southwest U.S. desert, red rocks, amazing canyons, and scrubby bushes. We took a flight to Buenos Aires for a few days. It was on par with New York or Mexico City in terms of being a cosmopolitan melting pot. I’d love to spend more time there.”
The Altiplano plateau in west-central South America was otherworldly, he said.
“We were usually riding around 13,500 feet for several weeks. The days are hot, the nights are freezing, and the wind kicks up a fierce dust storm from noon to dark so you have to do all your riding early and then find shelter,” he said. “We rarely saw evidence of people here. Most of the water we came across was saline or high in minerals and not drinkable. This made planning this section incredibly difficult as there just isn’t much information available and you sort of cross your fingers that you’ll find drinkable water in a few places. We got caught in a blizzard trying to cross a 5,000 meter pass. Luckily, a trucker drove by, first car we’d seen in two days, and gave us a lift just near the top.”
There was a lot of great riding in Ecuador, but they decided to take a series of river boats through the Amazon to Peru, Haag said.
“The system is not set up for tourism. The boats are crowded, slow, uncomfortable, and often break down,” he said. “At night we would stay in small villages that only had electricity for a few hours at night. After five or six days we made it to Iquitos, the largest city in the world not reachable by car. There are about half a million people there and you have to take a boat or plane to reach the city. Once we got to the mainland of Peru the riding became hard. Our legs were soft and we had to climb out of the jungle and regularly cross 12,000 foot peaks. It was some of the best riding though.”
Some days they would descend mountains for four hours on one lane roads carved into the cliff sides. One of the highlights was climbing Chachani Volcano near the city of Arequipa.
Haag said he was curious about riding through Colombia because of its reputation.
“As a country, it may have been the biggest surprise of the trip. The people are some of the most open and friendly I’ve ever met,” he said. “Cycling is incredibly popular there. We were there during the Tour de France and it was the first time a Colombian had won it so everyone was ecstatic. Tourism is still relatively scarce there, especially from North America, so everyone was incredibly interested in why we were there and wanted to know what we thought of the country. It was also the first place we saw, and rode through, the Andes mountains. They didn’t disappoint. it was by far the hardest riding to date in terms of climbing.”
Visit their blog at ThePlacesipee.com.