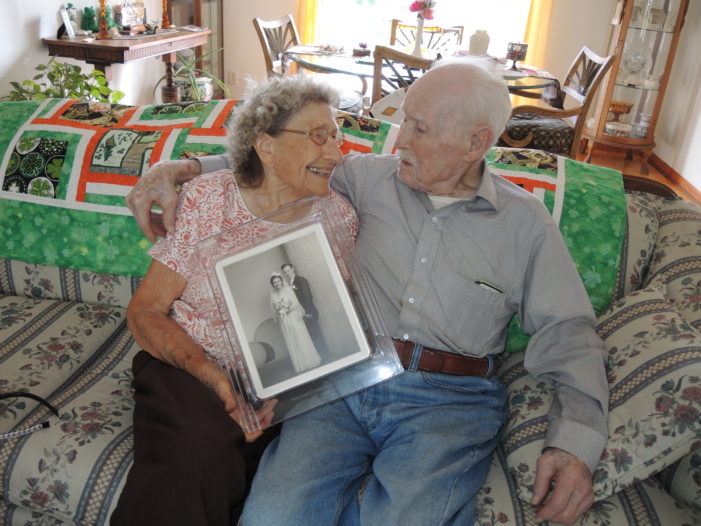 Annamarie and Frank Quinlan of Springfield Township are celebrating 75 years of marriage. Photo by Phil Custodio

BY PHIL CUSTODIO
Clarkston News Editor
A marriage born in the maelstrom of World War II is still strong, 75 years later.
With their diamond anniversary celebrated on June 24, Frank and Annamarie Quinlan of Springfield Township were asked if they had any advice to other couples young and old.
“I usually tell people to say, ‘Yes dear,’” said Frank, 98, with a laugh.
“And I say, ‘I wish,’” said Annamarie, 94. “No, it’s with the grace of God.”
They were married on June 24, 1944, a year and a half after they met.
In January 1943, Frank was a Merchant Marine sailor docked in Detroit for the winter when a friend asked him what he was doing for the night. He was going to visit his girlfriend and thought Frank might be interested in meeting her sister.
“I was a ship keeper on a freighter and there was nothing to do,” Frank said. “He said he knew a girl in Ferndale. I didn’t even know there was a Ferndale.”
Annamarie was working at Ft. Wayne Ordinance in Detroit, making Jeeps, halftracks, amphibious trucks, and other Army vehicles. When the sailors arrived at the house, she was babysitting a few houses down the road. She came home shortly after with her hair up in curlers.
“I didn’t want to go inside when I saw people were there,” she said with a chuckle. “I had to, though, because it was winter so it was cold.”
At first impression, Frank thought Annamarie was stuck up because she didn’t talk much, but she didn’t want to draw attention to herself with curlers in her hair. They decided to go ice skating, though, which drew Frank’s interest.
“I’m from Canada,” he said. “We learn how to ice-skate before we can walk.”
Frank’s friend didn’t last long because he got cold. Once he and his girlfriend left, Frank was left with Annamarie and her friends.
“I was left at the ice-rink with three girls,” said Frank, laughing. “That was the beginning of our romance.”
“The first present he bought me was a brand new pair of ice skates,” Annamarie said.
Despite a warning from her mother not to wed a sailor, they started going out.
“She said, ‘don’t marry a sailor. He has a girl in every port.’ Which I probably did,” Frank said mischievously.
“Somebody asked me one time, ‘aren’t you jealous?’ I said, ‘why should I be jealous? I’ve got him,’” Annamarie responded.
Frank was drafted into the U.S. Navy in January 1945, serving until April 1946.
He was stationed at Crow’s Landing, an auxiliary base near Naval Air Station Alameda in California. The base was secret, making it difficult for his new wife to visit the first time.
“They said there was no base there,” said Annamarie, who later joined him at the base.
Frank was assigned to PB4Y-2 patrol bombers.
“The planes flew over the Pacific patrolling for Japanese subs,” he said. “I worked in the ground crew, gassing them up, keeping them flying.”
Frank was born in Canada. Orphaned at a young age, he grew up in three orphanages before emigrating to the United States.
“I was a ‘nickel immigrant.’ It cost a nickel to ride the ferry,” he said.
He joined the Merchant Marines when he was 21, living in Chicago.
“I would see the freighters go by and thought, ‘I want to do that work,’” he said. “I did that for three years and then the war came on.”
He sailed the Great Lakes in the J.E. Upson and other freighters until he was drafted.
His younger brother, the late Louis Quinlan, remained in Canada. He flew Lancaster bombers with the Royal Canadian Air Force during the war.
“He flew 47, 48 missions over France and Germany,” Frank said.
Annamarie was one of eight children – her family life appealed to Frank.
“I wasn’t a family man. I lived where I hung my hat, on ship and in hotels in winter,” he said. “I liked the home-life atmosphere, so I settled down and got married.”
After the war, they settled in Ferndale, and Frank served on the Ferndale Fire Department for 18 years.
“I had red hair in those days,” he said.
“There’s a picture of me by the engine. You can’t tell my hair from the engine.”
They moved to Davisburg in 1965, where they ran building, cement, party store, and other businesses. They raised four children, Christine, Colleen, Patrick, and Sean, and have 12 grandchildren and 11 great grandchildren.
“We have family all over the country, and Canada because Frank is from there,” Annamarie said.

Frank is active with the AmVets in Milford and American Legion Post 63 in Clarkston. He wears his Navy uniform every year at the Clarkston Fourth of July Parade, Milford Memorial Day Parade, and other local flag ceremonies, parades, military funerals, and veterans and community events.
“I march to honor my country, and to show the history of our generation, defending our country,” he said.
He enjoys meeting young veterans and servicemen and women.
“I have great faith in the youth of today,” he said. “I appreciate what they do for our country.”