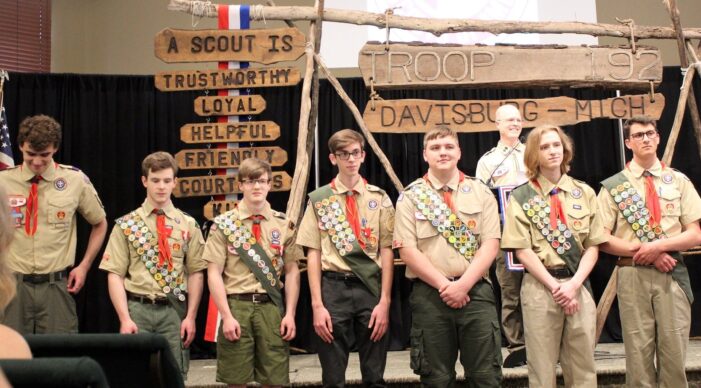 Boy Scout Troop 192 in Davisburg celebrated an unprecedented seven new Eagle Scouts this summer during their first Court of Honor since the COVID-19 pandemic began.
The ceremony honored Owen Gilliam, Elijah Ekstrom, Jared Ekstrom, Matthew Lacey, Ben Sanders, Shane Kenyon, and Jacob Mattson for their achievements.
According to the Boy Scouts of America, the rank of Eagle is the highest honor a youth can achieve in the traditional scouting program. Official statistics suggest only four percent of youth who enter the movement achieve the award, making so many new recipients at once very rare.
“We’re very proud and excited to see this progress, especially in the face of last year’s challenges,” said Jennifer Sanker, chairwoman for Scouting’s Pontiac-Manito District. “We’re also excited to see where these scouts go in the future.”
In order to attain the rank of Eagle, each of the seven boys completed a large service project for the benefit of the community. During the Court of Honor, Scoutmaster Daniel Hornback recounted how each youth planned and executed their own project.
“The Eagle Scout service project requires the candidate to plan, develop and lead others to a successful completion of a service project,” Hornback said. “Although there is no time requirement, the project must involve considerable hours and represent the youth’s best effort.”
Most of the boys dedicated their efforts to the preservation of Michigan’s natural places. The seven projects created protection measures for threatened animal species, removed invasive plant life, and introduced gardens and nature libraries for public use. Altogether, they accounted for hundreds of service hours from dozens of local scouters.
Assistant Scoutmaster John Coleman holds two positions in scouting, also serving as cubmaster for Pack 192, a unit for elementary-aged youth. He recalled several of the boys just beginning nearly ten years ago.
“Four of them were Tigers under me,” Coleman said. “I would love to see every boy come in as a Tiger and make it all the way to Eagle.”