Determined for the NHL 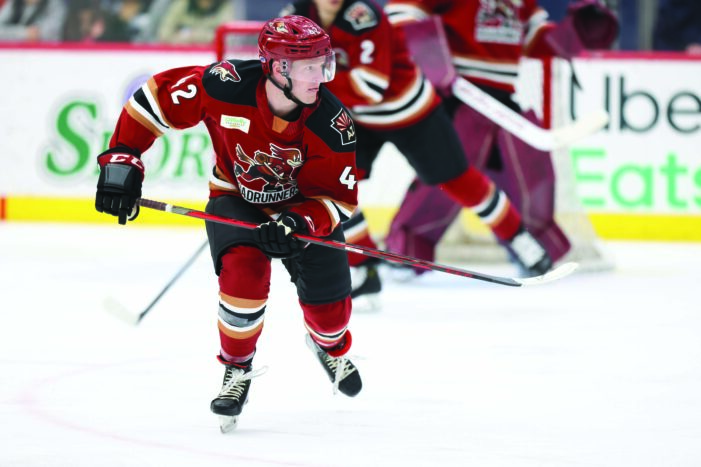 After finishing up his NCAA Division I college hockey career this past season at Michigan State University, Clarkston native Mitch Lewandowski signed his first professional contract with the American Hockey League’s Tucson Roadrunners.
Lewandowski used his fifth year of college eligibility due to the COVID-19 pandemic during the 2021-22 season and posted seven goals and 19 points in 21 games for the Spartans while also serving as an alternate captain. He missed 15 games due to an injury, but was named Michigan State’s Most Valuable Player and Outstanding Offensive Player.
With Tucson, Lewandowski scored two goals and added an assist in 14 games in the desert for the top affiliate for the NHL’s Arizona Coyotes.
“I loved my time in Tucson,” said the 24-year-old Lewandowski. “It was a great transition from college to pro. The guys and coaching staff welcomed me into the organization with open arms and it was a joy for those two months.”
Over his five seasons in East Lansing, Lewandowski skated in 156 career games, going for 121 points on 56 goals and 65 assists.
Lewandowski said he had several options after his MSU days were done to keep playing, and the Coyotes’ organization “somewhat came out of nowhere.”
“The Coyotes weren’t one of the teams I had talked to at all,” said Lewandowski. “An opportunity came up a day after my season and I was on a plane to Arizona three days later.”
Back on March 23 in a game in San Diego, Lewandowski scored his first professional goal in a 4-3 loss to the San Diego Gulls. He had recorded his first assist four days earlier in Tucson in a 5-2 setback to the San Jose Barracuda.
“Our captain, Hudson Fasching, created a turnover and I saw the puck sitting there, was able to grab it and, thankfully, put it in over the goalie’s right shoulder,” Lewandowski said of his milestone goal. “My parents (Jill Stout and Bobby Lewandowski) came down to Tucson a few weeks after that so I was able to give the puck to them as a cool gift.”
With NCAA regulations changing to allow athletes an extra year of eligibility due to COVID-19, Lewandowski took advantage of that, both on and off the ice.
“Returning to MSU for a fifth year was a great decision for myself,” said Lewandowski. “I love that place, and it will forever be a home to me. There’s so many memories I will carry on forever, but some of the ones that stick out are the comeback win against Ohio State at home my sophomore year. Getting to play with Patrick Khodorenko (New York Rangers) and Taro Hirose (Detroit Red Wings) for two seasons was special, and just being a Spartan in general was something I loved and took pride in.
“It made more sense for me to push classes back to this year and finish up. I plan to use my Advertising degree any way possible. I’ve met a ton of people throughout the years where I will be able to use my degree.”
Lewandowski is anxious to see where he’ll take the ice for the 2022-23 season.
“The hockey world is such a wait-and-see type of game sometimes,” he said. “As of now, I will wait and see what options open in the coming weeks. Heading overseas or signing an AHL/NHL contract will be next for me.”
In Clarkston, Lewandowski attended Bailey Lake and Pine Knob elementary schools, Sashabaw Middle School, Clarkston Junior High, and three years at Clarkston High School before leaving to play junior hockey in the United States Hockey League for the Chicago Steel starting with the 2015-16 season.

PHOTO: Clarkston’s Mitch Lewandowski skated for the AHL’s Tucson Roadrunners at the tail end of the 2021-22 season. Photo: Katie Dibildox