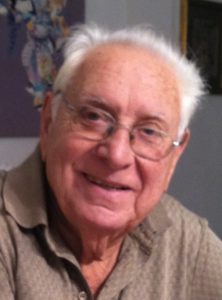 Deni, Don G., of Pompano Beach, Florida; formerly of Waterford and Clarkston, Michigan passed away peacefully on January 18, 2019 at the age of 95.
Don was born in Mongone Italy, Cosenza Province, on November 22, 1923. Don was the son of Vincent and Roseann Deni, and husband of Mary H. Deni of Niagara Falls, NY. Don is survived by his son Vincent, wife Janet, daughter Joey (Deni) her husband Charles Lambert and brother Paul Deni along with grandchildren, Scott Lambert, Stephen Lambert and Nicole (Lambert) Spagnuolo. He also leaves many nieces and nephews and great grandchildren along with his beloved caretaker Maggy Richardson.
Don was a long time resident of Pontiac/Waterford Township, MI, where he was a very successful business man as well as a political force in Oakland County. Upon his retirement from business, Don went to work for U.S. Congressman Bob Carr, where he headed up the small business administration for the congressional district.
In December 1989, Don was recognized by the United States 101st House of Representatives for his outstanding achievements. Don also served 4 years in the US Air Force during WWII. An avid University of Michigan Fan, Don was a football season ticket holder for 35 Years.
A memorial service will be held at Ottawa Park Cemetery, 6180 Dixie Highway, Clarkston, Michigan. Services will be held on Tuesday, May 28, at 11:30 a.m. in the Chapel at Ottawa Park Cemetery. Donations may be made to St. Jude’s Children’s Hospital.