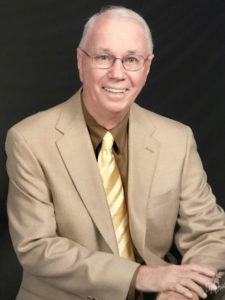 Donald Bruce Robertson, born on March 28, 1937, in Pontiac, Michigan, passed away on June 28, 2019, at his home in Davenport, Florida, surrounded by his family after a long battle with heart disease.
His family and friends will fondly remember Bruce for his past service as a deacon and elder at Tuskawilla Presbyterian Church. While attending Michigan State University, he swam competitively on the school’s swim team and continued to have a passion for swimming into his latter years.
He was a devoted Michigan State sports fan. After relocating to Central Florida in 1981, he eventually became an avid fan of Florida State and UCF sports.
Although Football and Basketball were his favorites, in the end he also became a fan of Tampa Bay Rays baseball.
He was a loyal member of the Lions Club and Rotary International with 28 years perfect attendance between the two. He was also on the Palm Valley pool league while living in Oviedo, Florida.
He loved spending time with family and made friends everywhere he went, whether out for a walk, at the bank or local pub.
He was a successful salesman, and owner of Creative Financial Services. In his retirement years he worked as a transportation driver for the elderly. He touched the lives of so many with his big smile, genuine and kindhearted manner.
His determination to always succeed enabled him to fully recover from two strokes and a broken hip giving him the nickname of “the comeback kid.”
He was preceded in death by his parents, Donald and Irene Robertson, cousins, Stuart Robertson, Arthur Robertson (Jill), their son, Randy Robertson, and his Grandson Matthew Tubandt.
He is survived by his loving wife Jan Robertson of 59 years, along with his children, Scott Tubandt (Tammy), Cindy Crandell (Rod), Jim Robertson (Lynn), Dawn Robertson (Matt Wedel) and Brian Robertson. He was the proud grandfather of nine grandchildren and six great grandchildren. He is further survived by his second cousins Jeff Robertson and Brenda Smith (Michael) along with several In-laws, nieces, nephews and friends.
Services will be held at First Presbyterian Church of Pontiac, 99 Wayne St, Pontiac, MI, on Saturday, September 28, 2019, at 11:00 am.
Donations may be made in his honor to The Lions Club, Rotary International or the American Heart Association in lieu of flowers.