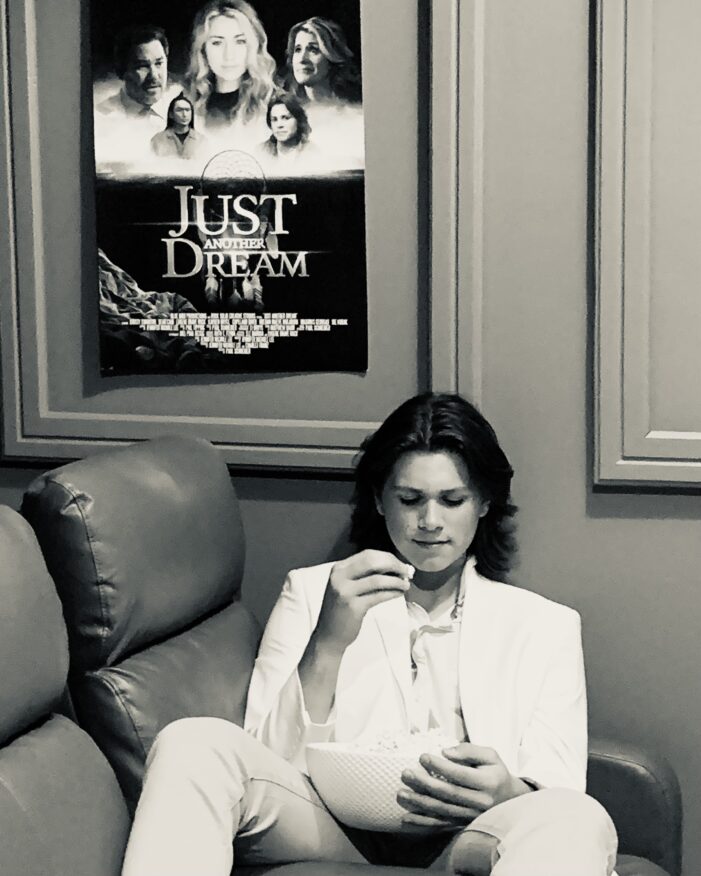 Copie Diver is finishing up his junior year virtually this week at Clarkston High School and will continue chasing his acting dreams next year at the Interlochen Center for the Arts near Traverse City.
Before that, Diver will be a co-star in a Michigan-based feature film that premieres this month, “Just Another Dream.” The movie is a family-friendly combination of comedy, drama and thriller, and showcases some Hollywood actors such as Dean Cain (“Superman”), Kristi Swanson (“Buffy the Vampire Slayer”) and Eugene Braverock (“Wonder Woman”). In the film, Diver plays Josh Mason, the best friend of the main character.
“I’m probably the comic relief,” laughed Diver. “The movie is about a teenage girl who has dreams about things hours before they happen. This movie has everything. We got to screen it with the cast via Zoom around Christmas. I have two older brothers (Luke and Mac) who were ready to tear it apart because that’s what brothers do, but they loved it. That was a pretty awesome moment for me.”
Diver has been acting since he was six years old and has been in several commercials, pilots, short films, radio spots, and more.
“I asked my mom every single day if I could be famous, have my own TV show, be in a commercial,” Diver said. “I finally wore her down and she sent my picture to a local talent agency. They called her within the hour and signed us. I got my first role soon after that and I instantly fell in love with the craft.
“Just to be clear, for every project I’ve ever worked on, there are 10 times more that I didn’t get. This industry teaches you about how to handle not being picked and move on really, really well.”
Diver’s accomplishments are even more amazing when one considers that he never performed in any local theater productions, not even in high school. He attended Independence Elementary before heading to Sashabaw Middle School, Clarkston Junior High and CHS.
“I never brought this part of my life into school,” said Diver. “I’ve never done theater ever; I’m actually a hockey player. I will say that when I was filming this most recent feature, I missed a lot of school. (CHS Principal) Gary Kaul gave me the best support. He encouraged me to pursue my passion and still stay current in my classes and communicate with my teachers. I felt like he really had my back. He even helped with my admission to Interlochen by sending a pretty awesome letter of recommendation. I’m truly forever grateful.”
Diver said the admission process to Interlochen had a bit of an awkward slope that wound up in his favor.
“Funny story,” said Diver. “Interlochen hosts Zoom calls for the incoming senior class next year and the moderator asked all of us to share our favorite scene we’ve been in from a play. When it got to me and I said I’ve never done theater, well, you can imagine everyone’s reaction. So I guess that’s what I’m excited about. Experiencing live performance acting and theater versus the on-camera experiences I’ve had so far.
“What makes me most excited to attend Interlochen next year is the opportunity to step out of my comfort zone. I think the confidence of being on stage mixed with the methods that they will teach will help me grow as an actor.”
Diver credits his parents, Gretchen and Britt, for helping him get to where he is today.
“My mom and dad have taken me to every audition, project, set for ten years now and have been my biggest fans,” Diver said. “They always support me, they always believe in me, they always encourage me, and I literally owe them everything, more than I could express.”
After this next school year, what does Diver have on the horizon?
“Well, Hollywood sounds a little predictable and we all know what a tough road that is, but my goals are high,” said Diver. “Why not?”