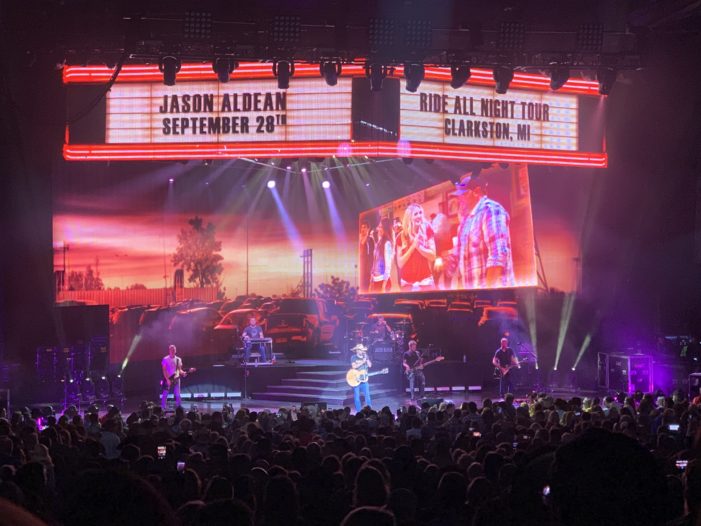 When Jason Aldean took the DTE Energy Music Theatre stage on Sept. 28 – not that he needed more cheers from the raucous fans – he did so in a Bob Seger T-shirt.
And for an hour and a half, the country music superstar kept all his fans engaged with all his hit songs, including the first single, “We Back,” from his new album, “9.”
Aldean sang all the songs fans have grown accustomed to hearing, including “Crazy Town,” “Hicktown,” “My Kinda Party,” “Big Green Tractor,” “Burnin’ It Down,” and “She’s Country.” Towards the end of the show, Kane Brown, who headlined Sunday’s season-closing show with Aldean, made a surprise appearance and sang “Dirt Road Anthem” with Aldean.
The pavilion at DTE for the Ride All Night Tour looked full, and the lawn looked to be at capacity as well – about 25,000 people all having a great time on an early-fall Saturday night.
One of the feel-good moments of the night was when Aldean’s wife, Brittany, came on the stage as he sang “You Make It Easy.”
Fellow country stars Carly Pearce and Tracy Lawrence were also on the docket for the Sept. 28 show. Pearce sang on Sept. 29 as well.
Lawrence, who has been around seemingly forever, had the crowd going with “Alibis,” “Texas Tornado” and “Paint Me A Birmingham.” He’s one of those artists, like Aldean, seems to genuinely love performing on stage.
Pearce is an up-and-coming star and has a voice that will take her far in the country music business. Her top hit, “Every Little Thing” has a great beat and lyrics and is one of those songs that will get stuck in your head and not drive you crazy.
Dee Jay Silver was also part of the weekend’s festivities at the two events.