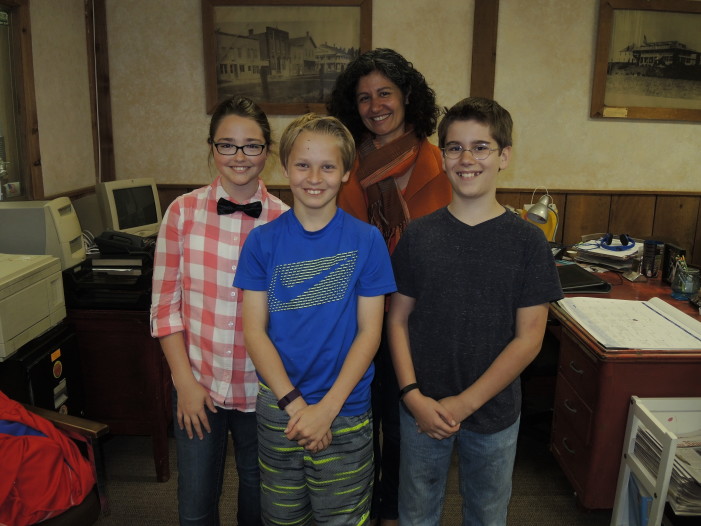 Independence Elementary earned Evergreen Status for students’ green initiatives this year.
The award is the highest in Oakland Schools’ Michigan Green Schools Program.
“I’m very proud of them, it’s a real honor,” said parent volunteer Chelsea O’Brien.
“It will help later in life, to be green,” said fifth grader Payton McCracken, who said one of her favorite projects was making squirrel boxes.
“We made a hammock with a blanket tied and hung from the top,” McCracken said.
“A teacher found an injured squirrel at school and we researched it,” said fellow fifth grader Christopher Bidinger.
Josiah Lipke, fifth grade student, said they also planted and tended gardens at the school, off M-15 north of I-75.
“We used grass areas not being used for anything,” Lipke said.

They planted potatoes, carrots, strawberries, sunflowers, chives, basil, strawberries, and other plants, O’Brien said.
“We put up a lot of deer fences,” McCracken said.
“And a deer feeder, someplace for them to eat that isn’t in the garden. And I want to make a nice place for coyotes to stay,” said Bidinger, who saw a coyote in the woods and asked if they could follow its tracks.
The students also worked on recycling projects, reduced use of paper in school offices, and planted milkweed for butterflies.
“There were so many projects,” said O’Brien, who volunteered along with Camila Duarte. “All the teachers and students worked all year long on them.”
“It makes school more comfortable, a nice place, with all the plants,” Bidinger said.
“It helps the whole school, make it a better place for everybody, a better learning experience,” Lipke said.
“The teachers come outside and read, and can pick berries and eat them,” McCracken said.
They made circle seats from old shirts for them to sit on.
“So you can sit in a spot and keep from getting muddy,” Lipke said.
Being outside reduces stress and helps one focus, O’Brien said.
As fifth graders, they’ll go to Sashabaw Middle School in the fall. Before then, however, they are brainstorming ideas for next year, McCracken said.
“Rain barrels for the garden,” she said.
“Plant different trees,” Bidinger said.
“Chicken pens, for chickens to eat pests,” Lipke said. “Five years from now, I want to help the environment, make it so people want to spend time outside by setting a good example.”
Other schools in Clarkston also participated in the Michigan Green Schools Program.
Clarkston Elementary and Clarkston High School attained Evergreen Status as well. Anderson Elementary and Clarkston Junior High School earned Green School awards.
Categories for the Oakland Schools Green Schools application are Recycling, Energy, Environmental Protection and Miscellaneous, which includes activities such as sponsoring an endangered species, and hosting environmental speakers, which Independence Elementary did this year.