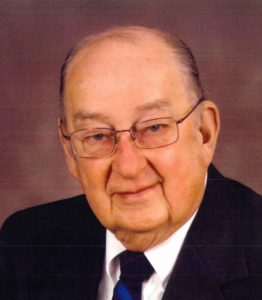 Eugene (Gene) Leon Metzger, age 91 of Hadley, Michigan passed away at St. Joesph Mercy Hospital on Wednesday, February 5, 2020.  He was born February 17, 1928 in Pana, Illinois to William and Marguerite Metzger.

Gene was a double veteran, serving in the US Army as well as serving in the US Navy, where he met his wife to be, also in the Navy, Jean Phyllis Heasley and married on 6-21-52. While in the Navy, Gene was a trombonist is the US Navy Band recruiting center in San Diego, California. Prior to the Navy, Gene was in the US Army and was involved in the occupation of Japan for a year. After leaving the service Gene went to Conn Vocational Instrument Repair School and started his own instrument repair service. Soon after, Gene spent many years as a troubleshooter for Shatterproof Glass Company moving with his family throughout the country. The owner of Shatterproof purchased Ziebart Rustproofing Co. and eventually placed Gene in the position of Vice President of Sales. After many years with Ziebart, Gene and Jean decided to go it alone and started in the printing business in November of 1980, where “The Print Shop” is still a thriving business going on 40 years, run by sons Doug and Gary and grandson Steven. Gene was active with the shop into his 90’s.  Gene continued with his trombone playing with Gary in the Orion/Oxford Community Band, Clarkston Community Band and the Waterford New Horizons band. He enjoyed doing yardwork and planting flowers, as many as 26 flats which he planted only several years ago and coming to The Print Shop daily. He reflected often of his growing-up days in Pana, Illinois and went to class reunions yearly up into several years ago.  Gene was preceded in death by his wife Jean Phyllis in 1992. Siblings Robert Metzger, Doris Barding, and Wilbur Metzger also preceded him. He is survived by sons Douglas (Lynne Hufnagle) Metzger and Gary (Linda) Metzger. Grandchildren Katherine Metzger, Steven Metzger, Christopher (Laura) Metzger and Andy (Katherine)Metzger, as well as great grandchildren, Cheyenne and Stella Metzger. Friends may visit Monday 5-9 pm at the Lewis E. Wint & Son Funeral Home, Clarkston.  Funeral Service Tuesday, February 11th at 12:30 pm at the funeral home.  Interment with Military Honors Ottawa Park Cemetery.   Online guestbook www.wintfuneralhome.com