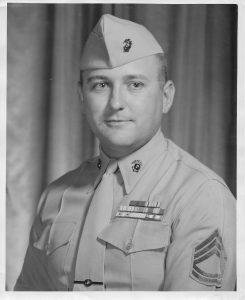 FOOTE, Eugene Perry, born October 4, 1927 in Lansing, MI, passed away June 19, 2019 in Battle Creek, MI at the age of 91. He was preceded in death by his wife Jacklyn Perry Foote, his daughters, Linda and Jackie and his grandson, Christopher. He is survived by his children, Diana (Jeff) Dubiel of Tampa, FL, Donald (Lynda) Foote of Milford, MI, Michael (LeaAnne) Foote of Huntley, IL, Dr. Barbara (Piet) Lugt of Laingsburg, MI, and Debra (Ken) Jorae of Kalamazoo, his 14 grandchildren and 10 great grandchildren. Gene was a proud veteran of the United States Navy and the United States Marine Corp. He served in World War II, Korea and Vietnam before retiring as a Master Gunnery Sergeant E-8 in 1967.  He returned to work at Fisher Body and retired from GM in 1987 as the head of security at the Lake Orion Plant. Gene lived most of his life in the Clarkston community.  He served as a member of the Clarkston Reserve Police Department. He was staunchly vigilant of the needs of his family. He was an avid golfer with his wife, enjoyed dancing and country music, and the camaraderie of his fellow veterans at the Clarkston American Legion. His television was ALWAYS tuned in to a sporting event or CNN news. In memory of Gene embrace your family, thank a veteran and enjoy your favorite sporting event.  Friends may visit at The Lewis E. Wint & Son Funeral Home, Clarkston Monday from 4-8pm. Funeral Service Tuesday 12:30pm at the funeral home. Interment with Full Military Honors to follow at Ottawa Park Cemetery. Memorial contributions may be made to Glenn Arbor Hospice Residence, 5470 Glenn Cross Rd, Battle Creek, MI 49015.