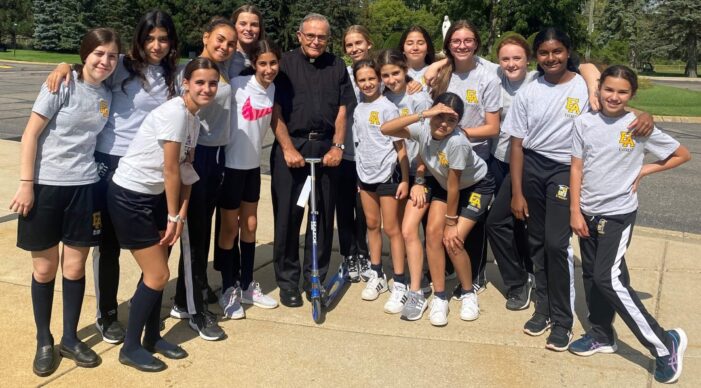 Thirty years ago, Everest Academy opened its doors to 33 students.
This year, Everest Collegiate High School and Academy has a current enrollment of 427 students in grades preschool through 12th grade.
Everest has impacted the lives of thousands of students and families. Fr. Lorenzo Gomez, LC, founding priest, returned for last week’s Founders’ Day activities and echoed what has been often said, “There is something special here.”
The celebrations began on Wednesday with mass with all students and several priests. Also present were Mary Anne Williams and Kay Browne who were among the founders of the school in the late 1980s and early 1990s. Everest’s admissions director of 23 years, Maura Plante, was also present. During mass, Fr. Gomez recounted the generosity of the founding families, giving special mention to the example of the Thewes family. Five grandchildren of the founders presented the gifts during the offertory at mass.
As the school celebrates its 30th anniversary, it has chosen a theme: Recall. Reconnect. Refocus.
Throughout the year, the school is delving more deeply into just what it is that makes Everest a special place. Everest shares in and passes on the charism of the Regnum Christi spiritual family to its students, faculty, and families.
This charism is rooted in a love for Christ flowing from personal encounter with Him that urges an individual response of bringing that same love to others. Everest has a distinctly charismatic culture that is manifest in its classrooms, throughout the campus, and within the community.
Founders’ Day activities continued Friday with mass, the Mountaineers’ home football game that evening against Saint Frances Cabrini, which they won 42-12, and a community mass on Saturday afternoon.
— Matt Mackinder