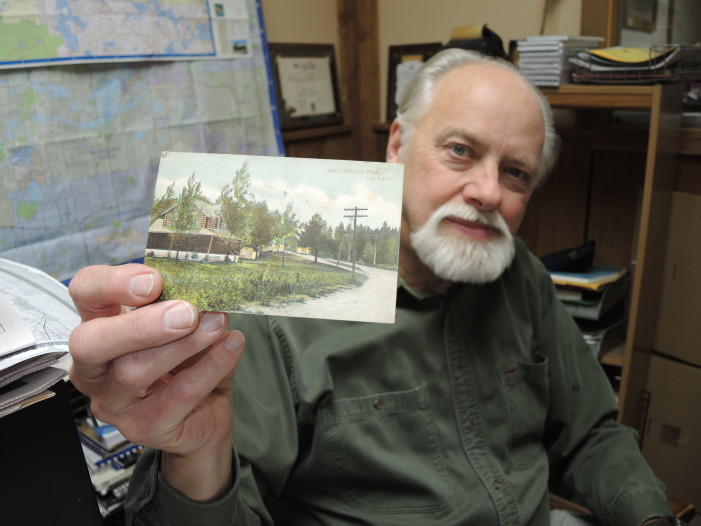 Les Haight, holding a photo of the log home in Clarkston.

BY PHIL CUSTODIO
Clarkston News Editor
Fourth in a series on the families who helped build Clarkston and the descendants who still live here, carrying on their legacy.
Five generations of Leslie Lynn Haight’s family have or are currently living in Clarkston.
“That I know of for sure,” said Haight, who has pictures of his ancestors at work and play in downtown Clarkston over more than a hundred years.
His family worked in town in the early 1900s, when Clarkston was an upnorth destination for Detroiters.
“Clarkston was a tourist attraction,” he said. “We had the big Deer Lake Inn, a big hotel downtown here, and a number of tourist homes. People would take the train to the depot, and carriages would pick them up.”
Eventually they got an open air bus, he said.
“My father (Lester Haight) remembered his parents putting him on the train when he was 5-6 years old and sending him to Clarkston,” Haight said. “His aunt and uncle (Mary Haight Hawley and E. Frederick Hawley) would pick him up at the depot and bring him home in an open-air roadster.”

The Hawleys were actors working in the U.S. and Europe, and owned a log house on Cemetery Lake as their summer home.
“They entertained my whole family out there,” he said.
The house, which burned down in 1926, is featured on a postcard he found on Ebay in 2008, from New Jersey.
“I never had an original one,” he said.
The card had been mailed by his great aunt to a friend in New Jersey, which he didn’t know when he bought it.
“It was pretty incredible to find it for $6,” he said.
Pictures also include great uncle Hawley in costume, dressed as a cowboy, army officer, and priest.
Other pictures feature his father as a child in a cowboy outfit, complete with six shooters.
“Probably real guns,” Haight said.
Others show his grandfather Ed Haight at his boat livery and campground on the property where the log house sat, operated from about 1928 until 1940.
“The Ford Motor Company bought all the property on the south side of White Lake Road all the way to the cemetery entrance,” he said.
His grandfather lived in Clarkston until he passed away in 1972.
“My father used to bring me out here to see my grandfather when I was a kid,” he said. “You had to pack a lunch to come to Clarkston. It was a long trip to come out here, there was no I-75.”
His aunt Mary Francis Bowman bought a 40-acre farm on Rattalee Lake Road in 1957 and owned it until her death in 1973. Les and his wife Rhoda bought it and lived there from 1980-1988, raising their two daughters.
“It’s a quarter mile from where my grandfather lived,” Les said. “When I drive around, I see all the places I see in the photographs. It’s pretty interesting to me.”

They have lived on Main Street in Clarkston since 1988.
“The house we live in is 112 years old,” said Les, who taught auto shop at Clarkston High School and was chairman of the Clarkston Historic District Commission for eight years. “It’s more important to me where I live than where I work – I’ve always liked where I live. You can always find another job.”
The Clarkston News and Tom Stone, longtime resident and genealogist, are highlighting every month local families who have lived in the area for at least 100 years.