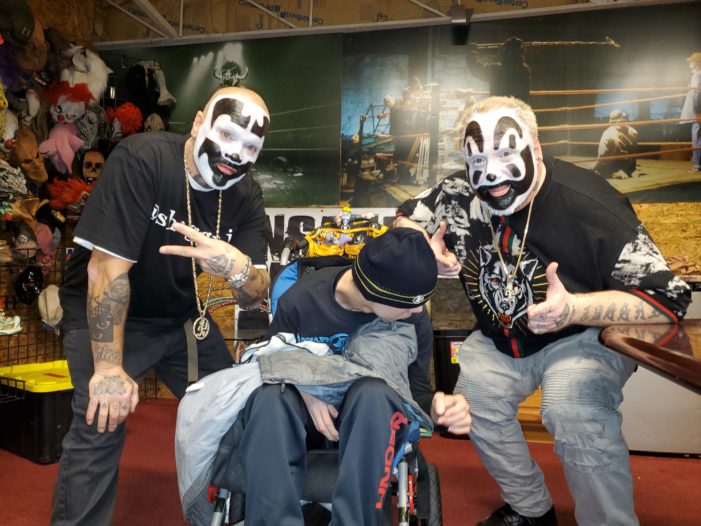 Cameron Belcher, who was born with the rare chromosome disorder Ring 14, visits with Shaggy 2 Dope, at left, and Violent J. Photo provided

BY PHIL CUSTODIO
Clarkston News Editor
Clowns are supposed to be nice, but Insane Clown Posse? They’re nice, too, something the Belcher family of Clarkston has known for years.
“My main story is about the kindness and thoughtfulness they and the other members of the tour showed Cameron,” said Belinda Belcher, his mother.
Born with a rare chromosome disorder, Ring 14, Belinda’s son Cameron Belcher is mentally and physically delayed, and has seizures almost daily. But he has always loved music. Growing up, his sister Chelsea and brother Christopher made it possible for him to hear all varieties, including the Detroit-based, hard-core hit hop of Insane Clown Posse.
“He loved them and loved their music. Of course, being a mother of a 10 year old, I was hesitant about letting him listen to the music with all the swear words,” Belinda said. “I let him beg for a few days for ‘Boogie,’ as he called them at the time. Cameron’s speech is very delayed, but was able to say ‘Boogie’ very clearly. I gave in, and let him hear them. I adjusted the language to Spanish, so he wouldn’t understand the bad words. He didn’t even care. He loved them.”
Cameron recently celebrated his 19th birthday, and subtitles are in English now.

“He has gotten to where he can say, ‘Insane Clown Posse’ pretty clearly by now,” Belinda said. “He listens to a lot of different kinds of music, but never goes a whole day without listening to his favorite clowns. Cameron has a lot of bad days, and when he finds something that makes him happy, no way I’m taking it from him.”
Last November, on Black Friday, Psychopathic Records hosted a tour of their studio in Farmington Hills, and leading the tour was Insane Clown Posse members Violent J (Joseph Bruce) and Shaggy 2 Dope (Joseph Utsler).
As soon as Belinda heard about it, she bought tickets for Cameron as an early present for his Dec. 12 birthday.
“We went to the noon tour and he had a Kool-Aid smile once he realized what was going on,” she said. “Cameron had been fighting a bad cold and tummy problems at that time. He wasn’t feeling so good that day, but he was too excited to let it show. Everyone just poured out their hearts to him, helped me get him up and down stairs with his wheelchair, and made sure he was in front so he could see.”
That wasn’t the first time she experienced the kindness of the ICP crowd. Christopher, now 24, was in an ICP video when he was 17.
“His sister’s friend got Christopher in the video, so he could take his little brother with him and meet ICP,” Belinda said. “That day was so much fun for both the boys.”
The video was for the song “Forever.”
“It was actually a wonderful song about life and feelings, and had no swear words in it,” she said. “The song unfortunately did not become a big hit, nor did the video.”
ICP and the fans who follow them, known as Juggalos, really get a bad, unfair judgment, Belinda said.
“I wanted to let everyone know they and their fans are big hearted, real people,” she said.
“ICP’s music has a lot of swear words and can come off as, well, pretty bad. Funny and joking around, but bad,” she said. “That’s what they sell and that’s their job, that’s how they provide for their families and themselves. Same as a movie star who might play a bad guy in a film, kill people or rob banks, but, of course, in real life, everyone loves them and fans follow them, because they realize they aren’t really murderers or robbers. ICP sells an image and songs people want to buy and hear, but are they really like the people in the songs they write? I don’t think so. I saw a very kind, caring, simple, loving family man in both the clowns.”
They are very hard working, dedicated artists who care about their crew, and their fans, she said.
“They are by no means a priest figure, nor are most of us,” she said. “But Insane Clown Posse is alright with me!”
Cameron, the son of Belinda and Michael Belcher, may be the only person in Michigan with the extremely rare Ring chromosome 14 syndrome.
“He struggles with daily routines, but he is a happy, loving, young man who enjoys more than anything being with his family and just having someone sit beside him,” Belinda said.