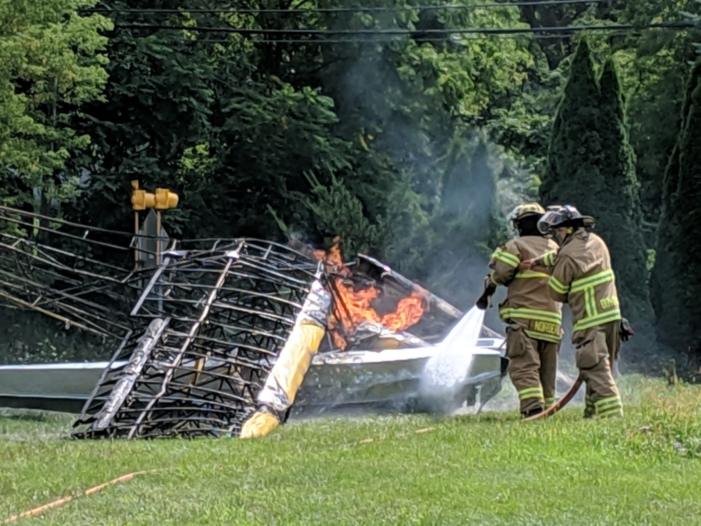 BY PHIL CUSTODIO
Clarkston News Editor
A fiery plane crash livened up Labor Day for an Independence Township neighborhood.
“Oh my gosh I was outside with the kids about 30-45 minutes ago and we saw it flying near Walters Lake. I hope everyone is OK,” posted Laura Hawley on Facebook after the crash in the front yard of a home in the 5000 block of Greenview Drive off Clarkston Road, about 1:30 p.m., Monday.
“Can’t believe he didn’t hit the house, sounds like everyone involved is pretty fortunate,” replied Tracy Johnston.
Richard Lyyski of Independence Township was on his motorcycle about to cross Clarkston Road when he saw the airplane fall from the sky.
“There was no traffic on the road and I crossed over, and the two guys were getting out of the airplane,” said Lyyski, who was on his way to the Labor Day car show at the First Congregational Church. “Walking around, one guy was bleeding a little on the face.”
Oakland County Sheriff deputies and Independence Township firefighters responded. They found the yellow sea plane fully engulfed in flames, which firefighters were quickly able to extinguish.
The pilot, a 64-year-old Clarkston man and owner of the plane, and passenger, a 24-year-old Clarkston man and son of the pilot, were transported by Independence Township paramedics to a local hospital, listed as stable. No one on the ground was injured, and it is unknown whether any cars were on Greenview at the time of the crash, said Lt. Larry Perry, Independence substation commander.
The Federal Aviation Administration has been contacted. Investigation continues into whether they were taking off or landing on a lake. There were no mechanical issues known as of Tuesday, Perry said.