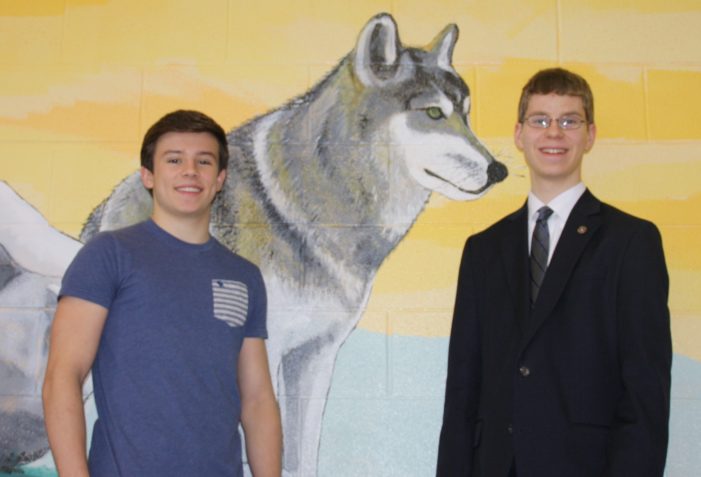 The life of a National Merit Scholar Finalist differs from student to student, but their academics and extracurriculars ensure one commonality: an involved lifestyle.
Clarkston High School has two finalists this year, seniors Andrew Dimmer and Max Anderson. Out of 50,000 qualifying students, Dimmer and Anderson were chosen as two of the 15,000 finalists.
“It’s pretty exciting, it shows the hard work that I’ve put in at the high school has begun to pay off,” Anderson said.
He is currently enrolled in five Advanced Placement (AP) classes, in addition to the five he took in previous years, and is on the Varsity Basketball team. He’s also been in Clarkston’s Science, Mathematics and Technology (CSMTech) Academy since 8th grade.
“That obviously has really helped me in terms of the math and science portions of these standardized tests and just teaching me in those areas,” Anderson explained. “I really like it, I’ve really enjoyed it.”
A score of 1480/1520 qualified Anderson for the merit scholar program. He said his classes prepared him well for the exam material and he prepared with practice PSAT tests as well. He hopes to get accepted at University of Michigan, studying data science.
“Michigan actually offers their data science degree through the engineering department,” Anderson said. “I thought that was really interesting, that’s what I want to do, so that’s why I think Michigan is my top choice, just because they have that specific degree.”
Anderson has on occasion been up until 2 a.m. completing school work, and during basketball season he practices for over two hours every weekday after school.
Though he isn’t involved in athletics, Dimmer participates in almost everything else. This semester he has three AP classes, two classes in the International Baccalaureate program, and he takes Calculus 3 at Oakland Community College.
He is also president of Business Professionals of America, the National Technical Honors Society and DECA, and an officer of the Optimist Club.
“I’m very excited, this is a great opportunity for me,” Dimmer said of being a finalist. He scored a 1500/1520 on the PSAT.
“The summer beforehand I was doing every day basically a practice test or two just to go see the material,” he said. Through his membership in several school organizations, Dimmer is also incredibly active in the community.
“I do a lot of stuff in the community through National Honors Society, National Technical Honors Society, Optimist Club, I usually run our soldier care package project each year, so I’ve been doing that, I also like volunteering a lot at the local library, I was on their teen advisory board last year,” he explained.
Dimmer has yet to decide on a college, but he hopes to find a program involving a mix of Information Technology and Computer Science.
“I’m looking to go to college for a computer science degree and see which direction that takes me,” Dimmer said. “Now that I do have more options in terms of being recognized by this National Merit Scholar Program, I think I’ve got better chances with maybe some larger universities if they still teach the classes I’m looking for.”
Dimmer and Anderson are in the running to receive one of 7,500 National Merit Scholarships. Winners will be named in the spring of 2018.