Flying dinosaurs are walking our streets 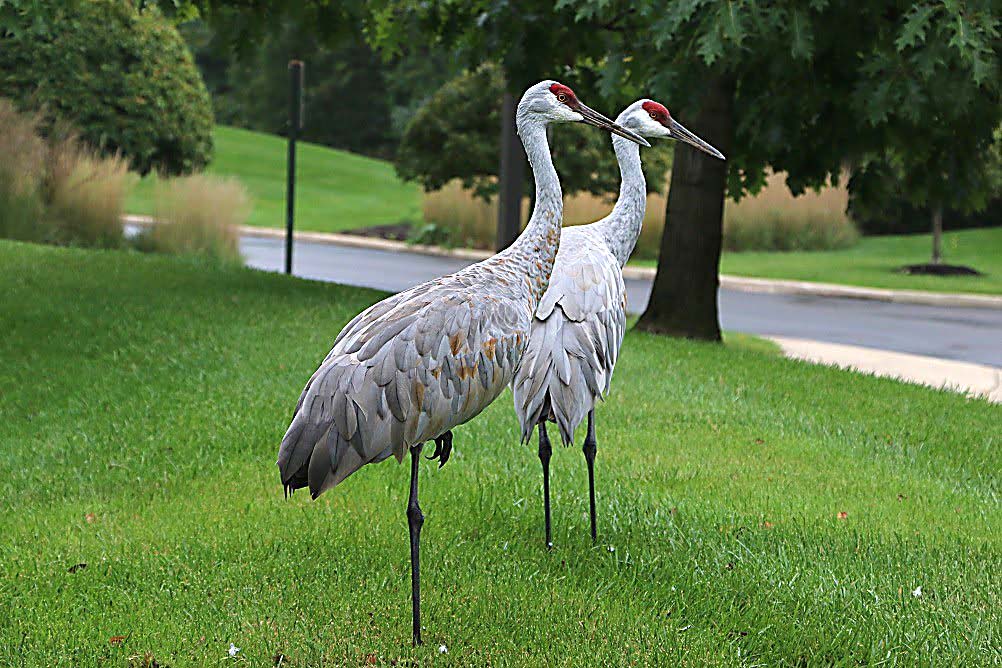 Here's a picture of Cranes I found at the Michigan Exposures blog. I think the photo was taken in Ann Arbor. http://michiganexposures.blogspot.com/2018/10/some-sandhill-cranes-at-work.html 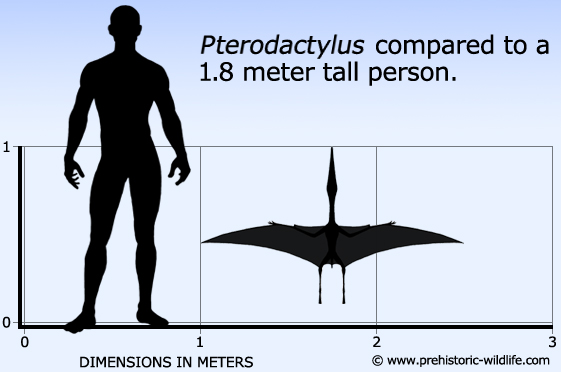 From the Prehistoric Wildlife website, I found this graphic on size comparisons.

Oh gosh. When was it, 1999?
Yeah, I think that’s about right. Twenty years ago, I remember first hearing strange and prehistoric sounds from above the yard at Casa D’Rush. Then seeing about a dozen big birds flying over my yard. Phonetically putting the pieces together, the word “teradactyl” swooped around inside my head and between my ears. (For the record, I have a hard time with big words and so I’ve always been a phonetic speller. Ten times out of 10 times I would misspell and mispronounce “Pterodactyl.”)
“What the heck? What could make that sound,” I remember asking first myself and then, later on my neighbors because myself didn’t know the answer. Neighbors Kathy and Mike K., knew the answer and responded thusly.
“Those are sandhill cranes. They have a nesting area back there.”
“Ah,” said I. “Interesting. I have never seen nor heard those before.”
As the years slipped by the number of sandhill cranes grew and grew. Their primal clarion magnified by their increased numbers. At first, ever the nature loving kinda’ guy, I thought it was cool to have been exposed to a critter I didn’t know about. And, I still think it’s cool to see them, but wow, they have come a long way, baby.
I see them everywhere now. I don’t know if all of the ones that live and breed near my home stay all winter, but a big number do. In the fall and spring I see them in turned over corn and soybean fields. I see them walking on Michigan Highway 15. I see them in neighborhoods in Oxford. And, just this week while driving to work a wee bit before 7 a.m., I had to stop my car while two sandhill cranes meandered their way from one side of the road to the other.
Who woulda’ thunk it years ago, we’d have sandhill crossing zones? Then again, I also remember thinking (about 20 years ago), “Wow. There are coyotes around here now. Cool.” And, thinking about 15 years ago, it was kinda’ neat to see beaver back in the area. I was triply amazed the other year to see a bald eagle flying over my house. I grew up in the area, and I can testify, they were not here then. Which brings me to this conclusion: Whatever we’re doing in these parts, we must be doing something right if all these animals are making a come-back.
Go Team Human!

So, when writing this column I wanted to find out more about sandhill cranes. I hopped on the old interwebs and found the Michigan Audubon website, and was greatly astonished to discover I wasn’t too far off in thinking sandhill cranes sound prehistoric. Get this, “Sandhill Cranes are believed to be the oldest living bird species, having existed for more than 9 million years in their present form.” In comparison, the online version of Encylopaedia Britannica says, homosapiens (us) are about 315,000 years old.
Now, that dear readers, is really kinda’ cool.

According to MichiganAudubon.org, these cranes are Michigan’s largest bird measuring up to five feet tall, with wingspans up to seven feet wide.
Compared to Pterodactylus antiquus, sandhill cranes are big. The flying dinosaurs’ wingspans are estimated to have been only three and a half feet wide. Pterodactyls lived 200 million to 136 million years ago, with fossils found in Europe and Africa.

I didn’t know this until writing this column, maybe you didn’t either. Pterodactylus means “winged finger.”

In 2017, some Michigan law makers pushed for a hunting season for the “rib-eye in the sky” (sandhill cranes). The push failed. Once close to extinction, I found, in 1944 there were only 27 pairs of sandhill cranes in Michigan. By 2017, through a successful conservation effort, the population was pegged at 24,000 birds.

And, finally received this email from Oxford’s Jay T., in regards to a recent column, and subsequent response to it. I waxed patriotic in the original column for the Independence Day observance. The following week a reader called me out for “drinking the koolaid” of patriotism. And, here are Jay’s comments.
“Hi Don. I read and actually enjoyed your column about Independence Day and found it to be insightful.
“Don’t worry about others who have a negative view on everything in their life. While DeeAnn makes some good points, it just tells the rest of us that we need to work harder to make changes in our society if we are going to improve it. Keep up the great work of keeping us informed!”
Will do Jay! And, thank you and Dee for reading and caring enough to write!
Send your comments, concerns and thoughts to DontRushDon@gmail.com

Flying dinosaurs are walking our streets added by Don Rush on July 17, 2019
View all posts by Don Rush →