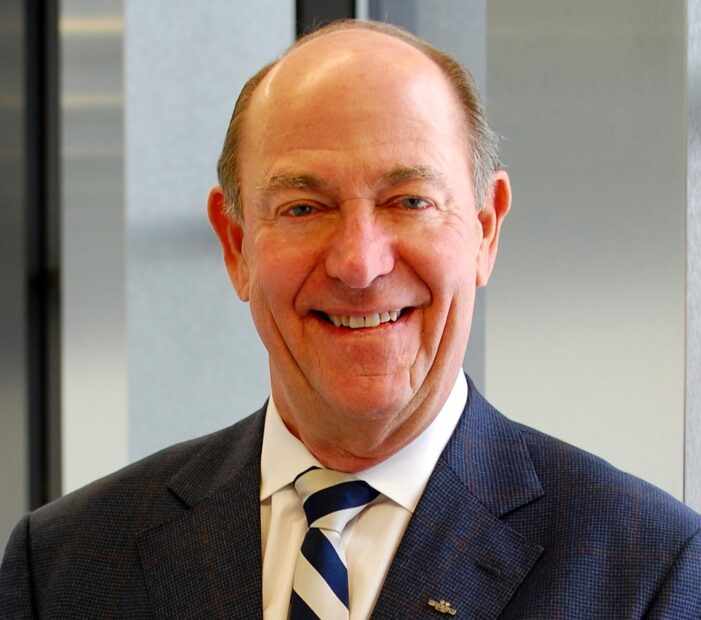 After nearly 55 years, it’s finally time for retirement for J. David VanderVeen.
VanderVeen, an Independence Township resident who oversees Oakland County International Airport, retired from the county last week after serving three elected county executives.
Not only does he hold the record for years of employment at the county, but he is among the longest serving accredited airport executives in the entire United States.
“There’s a saying that if you do what you love, you’ll never work a day in your life,” VanderVeen said. “For me, the time passed so rapidly.”
Retirement doesn’t mean a rocking chair just yet for VanderVeen, however. He will continue to represent County Executive Dave Coulter on the Oakland County Parks and Recreation Commission and the Airport Committee.
The county, aviation community, friends, and family will honor VanderVeen with a special reception at the airport terminal on Wednesday, Jan. 12.
“In this day and age, when job jumping is standard operating procedure and the Great Resignation is shifting our workforce, 55 years in one place is astounding, astonishing and remarkable,” Coulter said. “But most of all, its admirable that someone would devote their life to public service like Dave has.”
An inductee of the Michigan Aviation Hall of Fame Class of 2017, VanderVeen began working for the county when ownership of the then Oakland-Pontiac Airport transferred from the city of Pontiac to the county on Feb. 25, 1967 – before there was even a county executive.
The airport has since grown to have an annual economic impact of $1 billion on Southeast Michigan during VanderVeen’s tenure.
Some milestones at OCIA during his tenure include:
— Construction of the first LEED Gold-certified general aviation airport terminal in the United States in 2011, reducing energy consumption at airport offices by 44 percent. Fun fact: The conference room at the terminal building is the J. David VanderVeen Conference Center.
— Extension of runway 9R/27L to 6,521 feet, enabling larger aircraft to take off with a full load of fuel and reach any destination in the world
— Beginning of full-time U.S. Customs Service in 1996
— Completion of a $38 million noise abatement program which included insulating nearby homes and building a ground run-up enclosure to reduce engine noise when testing aircraft
— Construction of the first fuel-water separator, which prevents aircraft fuel from entering the stormwater sewer, at a Michigan airport
Under VanderVeen’s watch, the airport implemented improvements without utilizing county general funds. The airport paid for all projects from airport user fees or state and federal grants.
Among VanderVeen’s proudest achievements is the fact the airport runways never closed due to snow and ice because of the skill and dedication of the airport grounds crews, including the winter storm during Super Bowl XVI in 1982 when many came from around the country to attend the game at the Pontiac Silverdome.
He also initiated a beautification of the airport grounds which won several awards.
Vanderveen, a licensed private pilot, served two terms on the Michigan Aeronautics Commission from 2011-18. He is an accredited airport executive with the American Association of Airport Executives and was president of the Michigan Association of Airport Executives in 1973-74 and 1994-95.
He also was a member of the board of directors for the Michigan Business Aviation Association.
As director of Central Services, VanderVeen also managed the county’s vehicle operations, the mailroom, the courthouse cafeteria, and two other airports in Troy and Lyon Township.
With his retirement, the county’s three airports will become a division of the county’s Department of Economic Development.
“I’ll miss that resourcefulness, that commitment, that devotion to public service and to his help in making Oakland County the wonderful place we all love to call home,” Coulter said.
VanderVeen lives in the township with his wife Shelagh. Together, they have four children, eight grandchildren, and three great-grandchildren.