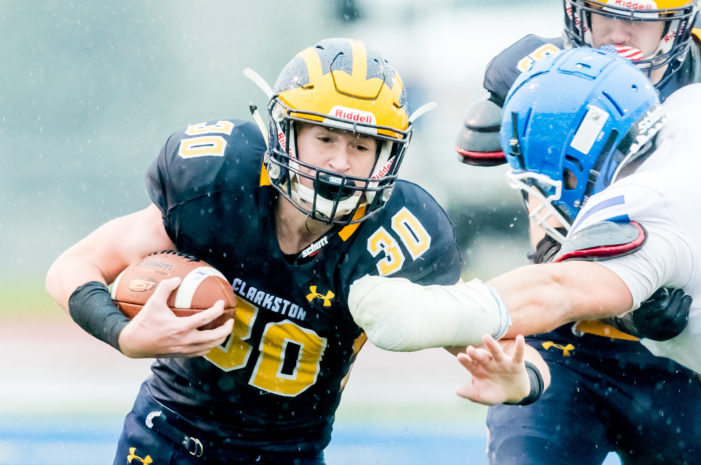 BY WENDI REARDON PRICE
Clarkston News Sports Writer
“Guess where we are going,” Kurt Richardson, long-time head coach of Clarkston Varsity Football, asked on the cold, rainy field of Walled Lake Western, Saturday afternoon.
The gridiron heroes just cheered – they all knew they were headed back to Ford Field for the MHSAA Division 1

Football State Final this Saturday, 1 p.m. They sealed the deal by defeating Detroit Catholic Central, 27-7.
“I said earlier in the week I thought it would come down to who could run the ball better,” said Richardson. “We ran the ball better. Michael Fluegel was good. Offensive line did a tremendous job and defensively we played real well. We made three huge special plays – special teams were huge.”
The Wolves were unable to score on their first possession sending senior kicker Jermaine Roemer out to punt the ball, which went 69 yards, starting the Shamrocks’ on their own 1-yard line.
Junior Brendan Barker and freshman Rocco Spindler kept the Shamrocks to a gain of only two yards in the first two plays.
“We were flying to the ball and our defensive front guys did a tremendous job,” Richardson said.
On the third down, DCC threw a pass and senior Cody Hughes caught it, turning control over to Clarkston and ran to the 2-yard line before he was stopped.
Senior Nate Uballe handed the ball to senior Josh Cantu who ran in a 2-yard touchdown as the clock marked 6:43.
The Wolves next score came with 5:35 remaining in the first half off a 6-yard run by Fluegel, putting the score 14-0.
The Shamrocks opened the second half fumbling the kick off from Clarkston. The Wolves recovered it on the 18-yard line. Three minutes later, Fluegel ran in for a 6-yard touchdown just making it into the endzone.
Fluegel scored again with 4:21 remaining in the third quarter after the Shamrocks ran out of downs and the ball went to Clarkston. Uballe handed the ball to Fluegel and he took off for a 71-yard touchdown run.
Richardson added the team peaked at the right time for the season.
“I told them we could be special,” he explained. “Then, we took a big hit when we lost Noah (Nicklin). We’ve had other kids step it up. Then, the Rochester Adams loss – sometimes you turn a negative into a positive. I think that was part of the deal. They wanted to go after it.”
Fluegel was the leading rusher with 111 yards on 19 carries with touchdowns. Cantu ran 95 yards on 21 carries with one touchdown.
“Mike has alwaysbeen a feature back the last couple years and at the tail end of the season we started using him more on defense,” Richardson said. “Josh is a mudder the more the weather got bad. Michael stepped up today and made the run. It sealed the deal.”
Roemer went 3-for-4 on PATs. He had three punts for 163 yards.
“The guy with little acknowledgement, Roemer, played a huge role,” Nicklin shared on Twitter. “Totally different game without him.”
Senior Zach Scott led defense with eight tackles and one sack. Senior Gino Paese, senior Tieler Houston, junior Josh Luther and Barker each had four tackles. Paese had one sack in the fourth quarter.
It was the second time Clarkston played Detroit Catholic Central in the playoffs in which they defeated the Shamrocks for the state title for their community.
Richardson took a moment glancing over the field as players congratulated each other and received hugs and high fives from family and friends.
“This is special,” he said, about the Wolves winning the semifinals for the community. “This is a special community. It always has been. I am just glad we can go back.”
The Wolves (11-2) head to Ford Field for a rematch against OAA Red foe West Bloomfield (11-2) for the state championship. Tickets are available at Ford Field for $10 each, cash only. Kick off is 1 p.m.