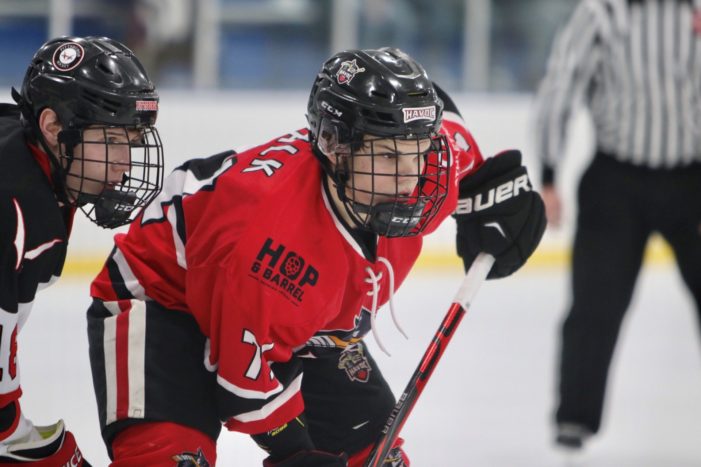 Brendan Walk turned a strong senior season on the ice at Clarkston High School into an opportunity to play junior hockey.
Last year, Walk tallied 12 goals and 33 points in 24 games for the Wolves and is now skating for the Hudson (Wis.) Havoc of the United States Premier Hockey League. He’s averaging better than a point per game with six goals and 29 points over 28 games.
“This opportunity actually came up last January,” said Walk, a 2019 CHS graduate. “My friend’s dad was associated with the team. I visited Hudson, skated with the team and loved it. The season has been great. The family I live with is awesome and so are all the boys on the team.”
Hudson, population 14,000, is located in northwestern Wisconsin, but the Havoc has other Michigan connections as the team is coached by former Lake Superior State University forward Brett Wall, and assistant coach Ryan Davis is a Detroit-area native.
“Brendan was able to catch the eye of Jim Mitchell, our director of scouting, during the 2017-18 season and Jim continued to speak highly of Brendan’s game during Havoc’s ‘18-19 season,” said Wall. “After hearing Jim continue to talk about Brendan’s grit, playmaking ability and hockey sense, my coaching staff and I felt we needed to bring him in to get a look. Brendan came up and skated with us for a week and we knew right then and there he could make an immediate impact as a rookie.”
Wall has been pleasantly pleased with Walk’s development this season.
“Brendan has adjusted to junior hockey very well and as a coaching staff, we could not be more happy about having him in our lineup and community,” the coach said. “He has thrived in the community helping in many community service projects as well as coaching at the Mite level in the Hudson Youth Hockey Association. He is a fantastic role model and big brother in his billet home and is beloved by his billet parents. On the ice like any rookie adjusting to playing against 19- and 20-year-olds, there is a learning period.”
Walk faced this early, but his hockey sense and playmaking ability allowed him to stick in the lineup as he learned a true 200-foot game, Wall said.
“He has been a scoring threat and a huge offensive help since he arrived in Hudson, but it is his new added attention to the details in the defensive zone that have allowed him to become a player who plays in all key situations for us as a rookie,” Wall said.
Growing up, Walk played travel hockey for the Oakland Jr. Grizzlies, Metro Jr. Jets and Jimmy John’s associations before donning school colors for the 2018-19 campaign.
“I started playing hockey because my dad played his whole life and then I fell in love with the game myself,” Walk said. “I decided to play high school hockey my senior year because I had a couple other friends who played at high levels in the past, and they convinced me to play.”
Walk, who also played roller hockey as a youth, is the son of Kim and Keith Walk. He has a sister, Makenna, 19, who goes to Grand Valley State University, and a brother, Cristian, 15, who goes to CHS.
Having lived in Clarkston his whole life, Brendan said the best part about the town is “how supportive the whole community is.”
Graduating with a 3.75 GPA, Walk also attended Bailey Lake Elementary, Sashabaw Middle School and Clarkston Junior High.
“My goal is to play another year of juniors after this year and then, hopefully, play in college,” said Brendan.