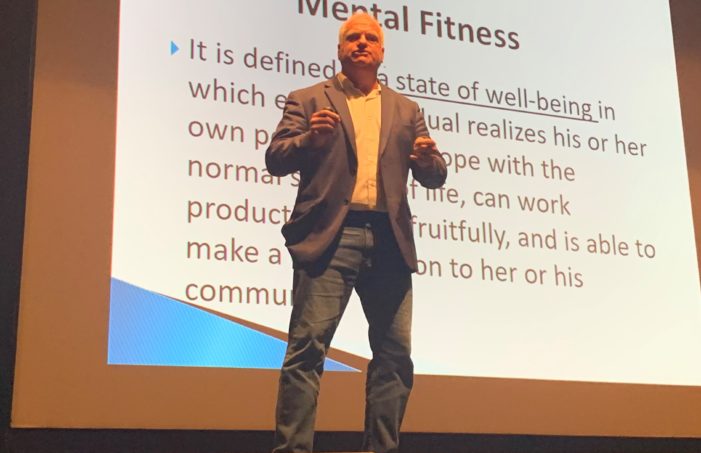 Eric Hipple has seen the ups and downs of life.
A suicide attempt survivor, the former Detroit Lions quarterback lost his 15-year-old son, Jeff, to suicide in 2000.
Now, he’s making the rounds to help erase the stigma surrounding mental health. Hipple spoke at Clarkston High School, Oct. 16, during the day to engaged students and in the evening to parents and members of the local community.
“When we look at things, it’s through context – how does it match up against something else? – and perception – what does it mean to me?” Hipple said. “That’s how we view the world. Our thoughts, our feelings and our actions are all connected. That means if I’m thinking negatively, thinking negative thoughts all the time, it affects my feelings, maybe it makes me feel like I’m left out, alone, sad. Maybe I take out my feelings on somebody else. That’s the action part – I took it out on someone else. Feelings, thoughts and feelings, remember, are all connected.”
While the recent passing of Clarkston High School junior Jack Lehman via suicide was still fresh in many students’ and staff members’ thoughts, the assembly was scheduled long before Lehman’s unfortunate death late last month.
“Mr. Hipple gained at least a little bit of fame as a 10-year quarterback for your Detroit Lions,” said Clarkston High School Principal Gary Kaul in reading a statement prior to the presentation. “Though, I would say his life’s work began after his NFL career ended. He’s devoted his life to building awareness to breaking the stigma surrounding mental illness. He has devoted his time to expanding education about mental health and well-being.”
Hipple then addressed the students and admitted that that introduction may have scared some of them.
“I can see some of you tightening up,” Hipple said. “This is a tough subject. I present it in a way where we can look at it a little bit different. In doing so, I call it ‘mental fitness.’ That’s a term we can use just like when I work out, to get in shape. There are certain things I have to do to get in shape. This is no different.
“There are certain things we can do to get us into the mental health spectrum where we are really healthy.”
Hipple also hit on social media, saying that a reaction someone may have to a certain post reflects on the mental state they are in at that time. If one is in a dark mood, they’ll see a simple post as negative, and vice versa.
Cut by the Lions in his 10th season with the club in 1989 after a game where he threw two interceptions that were returned for touchdowns, Hipple said, “you talk about transitions. I was a football player and I wore a uniform every fall since I was 9 years old. That’s who I am, and then I didn’t know what to do.”
Jumping out of a moving car in 1997 in a suicide attempt after giving a note to his wife, Hipple refused help after that event.
“That was the stigma,” said Hipple. “That wasn’t me. I didn’t to be ‘that guy.’ So I never got help. The problem with that is that I never learned anything either. And not learning really cost me because three years later, my 15-year-old son, who was going through transitional issues himself and depression issues, while he was doing this, I kind of ignored this because we didn’t talk about this stuff. My mom suffered from depression, and we never talked about it. My dad would say that she’s having one of her spells, so she’s not coming out of her room. That was it.”
Hipple wrapped by having the students pat themselves on the back for making the decision to come to his presentation and to be in school.
“You don’t have to be in school; you can walk out the door right now,” said Hipple. “The benefit you’d be missing is this relationship, the chance to learn, the chance to advance yourself. We choose all the time to recognize what it means to be here (in school). Great choice.”
For more information, visit www.erichipplespeaks.com.