Friends fight to help fellow grad get around 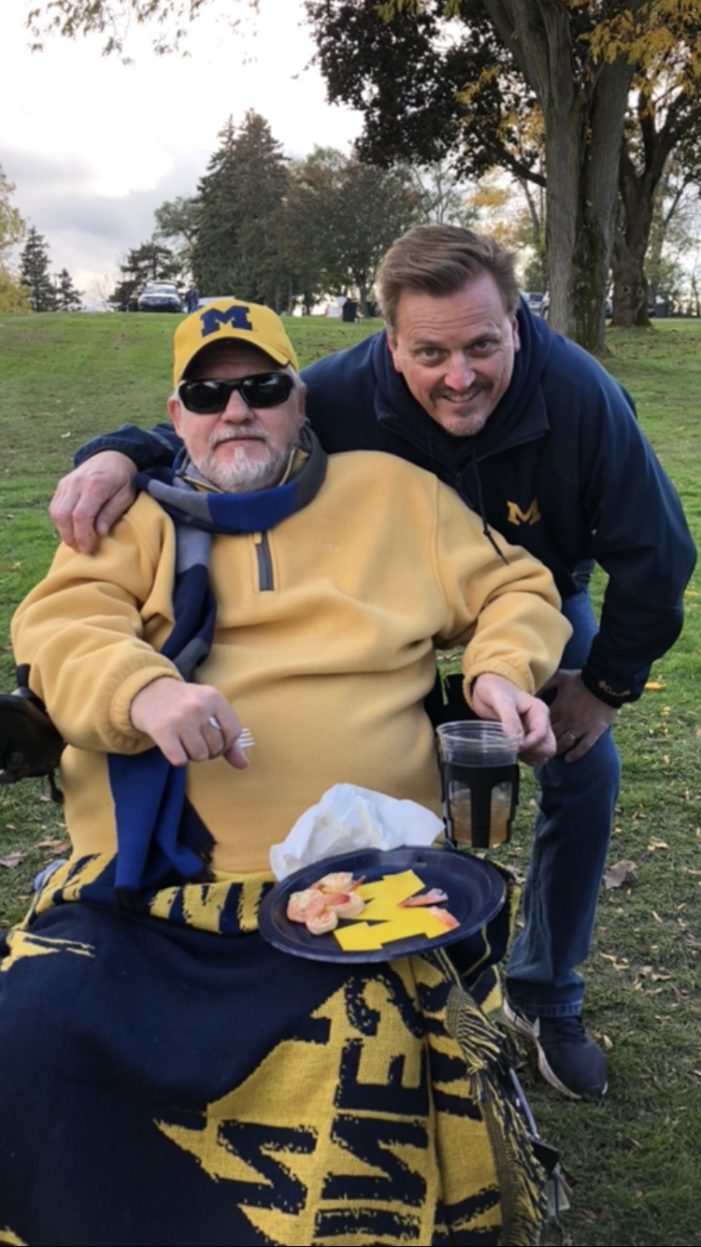 Dave Muhleck is helping to lead an effort to get former classmate David Watson a new mobility van. Photo provided

BY PHIL CUSTODIO
Clarkston News Editor
Clarkston grads are calling on friends and neighbors to help a former school mate.
“We’re from Clarkston,we know people from Clarkston. Why not appeal to the Clarkston community to see if we can’t help a guy out,” asked Dave Muhleck, who graduated from Clarkston High School in 1981.
Muhleck and Selena Guidry are collecting funds for a wheelchair-accessible van for fellow CHS graduate David Watson.
Guidry researched online options and established a Gofundme campaign to raise $50,000 for a van, modified to carry Watson and his motorized chair in the front passenger position. The campaign is about a quarter way there.
“It’s a large hurdle,” Muhleck said. “We’re working to figure out ways to keep it fresh.”
Muhleck and Watson grew up in the same area, but didn’t become friends until after graduation.
“Dave and I were neighbors but not really in the same circles. I got to know him after got out of college,” Muhleck said.
Watson suffered a broken neck from a diving accident nearly 38 years ago, at the age of 18. The accident left him a quadriplegic, paralyzed from the chest down.
Watson’s accident was during Muhleck’s senior year.
“He was injured very badly in a diving accident on Deer Lake. We visited him in the hospital and kept in touch,” he said.
Both diehard sports fans, they got to know each other tailgating and enjoying the games.
“My son and I and my dad, we’d go to a lot of sporting events and we invited him to the games on a fairly regular basis,” Muhleck said.
That’s when he noticed a need for a new vehicle.
“I started to get a good idea of what he was going through,” he said. “He would be in the van for an hour. He would have to sit hunched over. His chair didn’t really fit in it.”
They will also reach out to local charities and foundations, and residents of Milford, where Watson lives.
“He drives his chair downtown and goes out to eat a lot, people know him downtown,” Muhleck said.
The campaign is in memory of his father, Earl Muhleck, who passed away on Dec. 22.
“When we were setting up his memorial, with my mom and brother and sisters, we thought instead of money for flowers, why not ask for donations to Dave,” David said. “The whole family all said ‘yes, let’s do this.’ We’ve all tailgated with him and got to know him better. It’s something my dad would be proud of.”
They started planning it 2-3 weeeks before Earl passed away so he had the opportunity to help.
“He was very happy to hear we were doing something for a former neighbor, someone he cared about,” David said. “It was a natural for us, a good way to honor his name because that was the kind of stuff he did all the time, to make something good out of it that was a positive for us.”
The campaign to help Watson is a good legacy for him, David said.
“My parents set an example for us. Both of my parents did lot of giving back through their church, to help local food banks and other charities,” he said. “It’s a natural thing for his name be in honor of someone else.”