Well, rats. I hate when I flip-flop like I am gonna’.

Oh, since about what, Day One AE (After Election) I have yammered on about all the hubbub taking place in these here un-united states of America. Fake news, stupid un-presidential “tweets”, the unending squawking from anyone and everyone who may or may not have been hurt by said tweets and especially by those elitist Hollywood types who love to lecture about love and compassion for just those things they love and are passionate about . . .
It is so much, so loud and so long, it has only become white noise to me. All I hear is “Wah, wah, wah, wah,” just how the Charilie Brown kids heard adults.
Of course when I chime in, folks always write back, “But, Don you said you wanted us to get involved. Now we are involved and you’re telling us to shut up an sit down. What gives?”
I guess, to you folks I answer, there are ways to communicate and yelling and name calling and having a tantrum is one way to get any one who disagrees with you to tune you out. I was trying to think of something, some way to illustrate my point to no good avail. Nothing, Mother Teresa. No. Mahatma Gandhi. No. And, then it hit me. Young Master Shamus . . . my very own son was a good example of stepping up and being counted.
Let’s turn back the hands of time — 11 years ago to the day — I opined in these, the hallowed halls of Don’t Rush Me-dom, thusly . . . .

A couple of Sundays ago Clan Rush watched an evening newscast. Before the news even started, the station teased the lead story with something like this: “Mayor says Detroit Zoo will have to close. Pink slips to be mailed out Monday.” 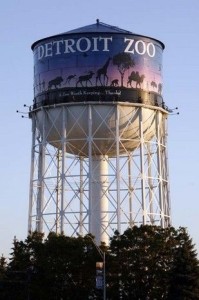 I shook my head. The boys’ mother, Jennie, put her head in her hands and eight-year-old son Shamus got emotional. Five-year-old Sean, still oblivious to the world revolving around him, had a bad gas attack and laughed. No, this column isn’t centered, like the universe, around Sean’s status as a very large Stinkasauras — but I digress.
It was before dinner and after the completed TV news segment, the emotional Shamus went to his bedroom. “Why would they want to close the zoo?” he said over and over.
God bless Shamus’ mother. Jennie comforted her eldest son with words of wisdom only mothers can impart. Dad’s say stuff like, “Get over it kid. It’s a hard world out there, get used to it, and if you don’t stop crying and get out of bed, your brother’s gonna’ eat your dinner.”
As the male parental unit, I don’t know what was uttered in Shamus’ room. It was all kind of “hush-hush” and secretive. I do know this much, when Shamus came out his eyes were still red-rimmed, but the boy had a plan.
He called his third grade teacher, Ms. Kelly Alford, at home and asked if he could speak to class about the impending zoo closure. It was okay and Shamus got to work.
He and his mother made up a flyer. I worked with him on organizing his thoughts. We made note cards with The Problem, The Solution and Shamus’ Plan spelled out.
So passionate he was, he didn’t even use his note cards. He spoke from his heart and won over his class. With the help of Ms. Alford they e-mailed all the other teachers in the school, enlisting their help in a letter writing campaign. They drew up posters and after lunch, while other students were at recess, Shamus and a couple of his chums plastered the hallways with their posters — the message clear, Help Save The Detroit Zoo, Write a Letter!
Within a week over 100 students wrote their thoughts, in letter form, to Detroit Mayor Kwame Kilpatrick. Some drew pictures and some added hearts. Jennie, Shamus and Sean hand delivered them to city hall earlier this week. And, well, what can I say. I am proud of them and of Shamus.

He saw something wrong, sucked it up and worked to make that something right. (I am smiling as I type). Our boy Shamus is a leader, not a follower. Jennie sure has done well by our boys.

So, after reading what I wrote and first published on March 1, 2006, I hereby take back all I have said since Day One AE. Carry on (just tone it down a little bit, add some more compassion to your passion, find some common ground and move from there.) Peace out.
Comments for the Flip-Flopping Son-of-gun Don Rush can be e-mailed to, DontRushDon@gmaill.com

One Response to "Well, rats. I hate when I flip-flop like I am gonna’."