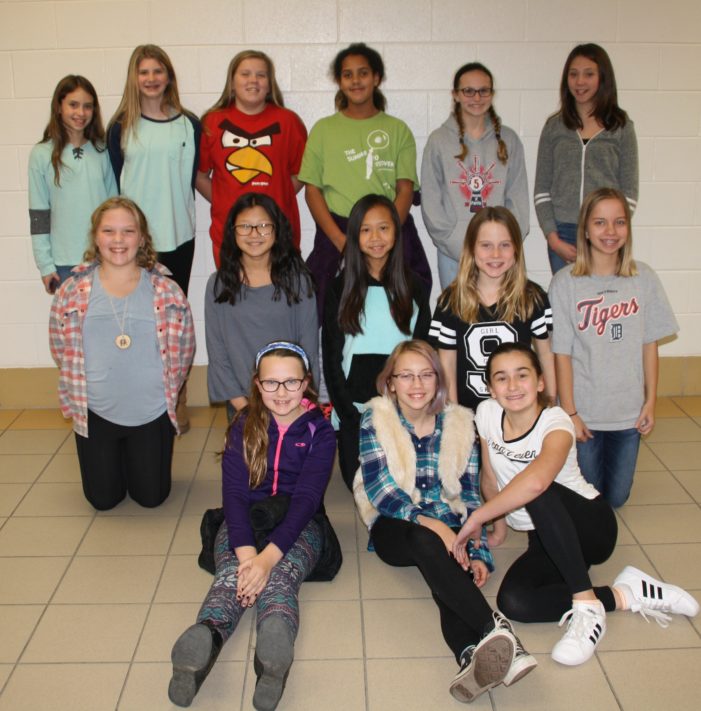 The participants of Girls Stand Strong. Photo by Jessica Steeley

Middle school girls learned tactics to stand up to bullying and ways to build self-esteem during the 4-week Girls Stand Strong program at Sashabaw Middle School.
“The idea for the group is just to give girls a space after school where they can talk about some of the issues related to bullying that are going on with them, and really learn some assertiveness skills and do some practicing for how they might deal with those kinds of incidents,” Clarkston Area Youth Assistance Social Work Intern Becca Newland said.
Newland described the group as a space where participants can be honest, share ideas and talk to other girls having similar issues. Grant money was used for the program and youth assistance is planning to put it on again in the spring.
“We’ve been doing a lot of stuff to bring us closer and to make us stronger than what we are,” seventh grader Lily Morris said.
Morris joined the program to understand what other students at the school are going through and try to help improve their confidence and self-esteem.
“Other people are going through tough times and it’s not just about me,” she said. “So, I like to help the other girls in the group to know they’re appreciated.”
The girls participate in the program for a variety of reasons, Newland said, some because they’re dealing with cyberbullying or bullying during school, and others to learn about the effects of bullying and how to avoid being a bully.
Sixth grader Carleigh Ottman choose to join because of the bullying she’s dealt with in school.
“There’s been multiple girls in the group that have been bullied by one person and I feel like it’s kind of spreading to the rest of the school, ’cause there’s still so many people that still do it,” Ottman said. “It’s good for us to have this program, mostly because it’s just for the girls that don’t have that self-esteem or that confidence to stand up for themselves.”
The Girls Stand Strong program has helped teach Ottman how to stand up to bullying. She said walking away helps, but also making it clear you want the person to leave you alone.
“If they really follow you I think that you might as well just tell another person, most likely an adult,” Ottman said.
Newland said the group focuses on teaching girls how to handle the situation on their own, before reaching out to an adult, because of the stigma of “tattling.”
“We’ve talked about how body language and just like appearance and facial expressions can make a difference in whether the bullying continues or not,” she said. “Really standing up with a certain kind of stance, in a tall, strong stance can actually have a big role in how the incident goes.”
The group of girls shared different stories and experiences they had with bullying and self-confidence throughout their education. Girls Stand Strong will be held again in the spring semester at Sashabaw Middle School.