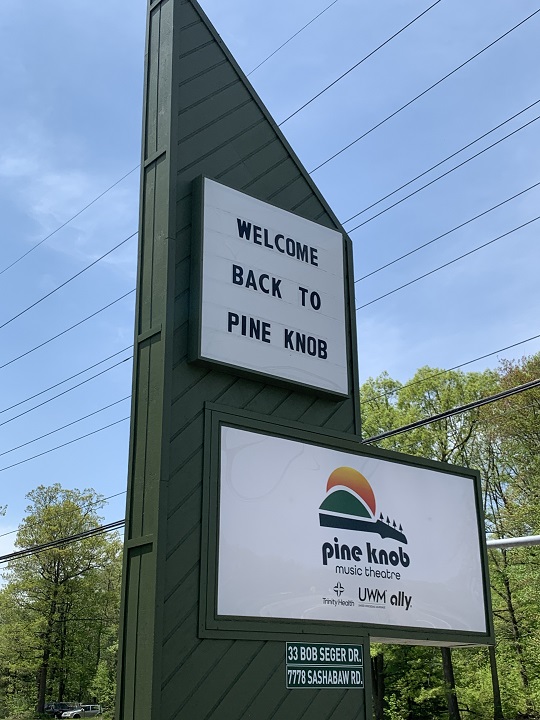 David Cassidy opened Pine Knob Music Theatre with a concert on June 25, 1972.
Now, nearly 50 years later, the popular outdoor amphitheater on Sashabaw Road in Clarkston will open the doors this Friday to AJR as the venue kicks off its 50th anniversary summer season.
Last Friday, 313 Presents hosted a media event at Pine Knob to showcase all the changes to the location and to formally recognize the new corporate sponsorships with United Wholesale Mortgage, Trinity Health, and Ally Financial.
“When we announced bringing back the Pine Knob name in January, artists and fans and really everyone rejoiced,” said 313 Presents President Howard Handler. “We clearly tapped into something special. This legendary venue is full of so many memories and tells a story of serious innovation and a number of firsts.”
This summer, the list of concerts coming to Pine Knob includes Halsey, Miranda Lambert and Little Big Town, Josh Groban, Dave Matthews Band, 99.5 WYCD Hoedown (with Brooks and Dunn on June 25, the actual 50th anniversary of the Cassidy concert), Barenaked Ladies, Doobie Brothers, Thomas Rhett, Rod Stewart, Carlos Santana, Incubus, Phish, Styx and REO Speedwagon, Pitbull, Cheap Trick, Backstreet Boys, Imagine Dragons, Zac Brown Band, Jason Aldean, Keith Urban, Wiz Khalifa and Logic, Nas and Wu-Tang Clan, and Kid Rock.
“A huge thanks to our friends and longtime promoter partner Live Nation, who bring always the most sought-after acts to Pine Knob every season,” Handler said.
New food items will also be on the docket this summer at the various vendors inside Pine Knob.
The press conference last Friday also had an added local flavor as Jeff Cumberworth, senior director of marketing for Ally, is originally from Clarkston.
“As a metro Detroiter and Clarkston native, I can’t tell you how excited I am to be here,” said Cumberworth. “There are so many stories I could tell about that I probably shouldn’t about this place, but when we were approached to be a part of this, it was just a no-brainer to restore this brand to what it was.
“To me, this is home, and to me, this is something where I’ll bring my kids, where I was brought as a kid. It’s just such a huge piece of my life.”
In addition to the new name, signage and sponsorships, Pine Knob has a new photo exhibit between the east and west entrances that showcases concert photos of the first 49 summers at Pine Knob. Many of the exhibit’s photographers were on hand last Friday at Pine Knob to gather and reminisce.
“Concertgoers are going to be able to re-live some of the venue’s first 50 years with the photo exhibit on the west side,” Handler said. “The work that went into this exhibit took months of research and outreach because there really wasn’t just a single archive to capture all the work from five decades. The photos were shared by so many talented photographers, and it’s just been incredible to see.”
The address of the amphitheater was officially changed in June 2019 from 7774 Sashabaw Road to 33 Bob Seger Drive, to honor the 33 shows he has done at the venue. He played his final show there on June 21, 2019.
Pine Knob holds just north of 15,000 fans, including the lawn seats, and from the excitement exuded by Handler and others that spoke last Friday, there is a distinct possibility for many sell-outs this summer.