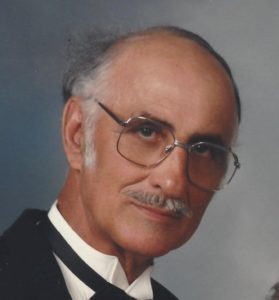 HACKER, Gordon L.; of Ortonville, formerly of Essexville, Pinconning, Ewen and Bruce Mines, Ontario;  May 26, 2018; age 90; born April 6, 1928 to Mildred Bacon and Edward Hacker; preceded in death by his wife Mary “Barb” Hacker, and his parents and sisters Joan Hacker, Donna (Jack) Reilly and brother Irving (Betty) Hacker.  Father of Gordon “Corky” Hacker of Bruce Mines, Ontario, Trish (John) Hennig and Tom (Bonnie) Hacker all of Ortonville & Laura “Lauren” McGarry (fiancé Randy Miller) of Pendleton, SC.  Grandfather of Kassie and Olivia Hennig & Tessa Hacker. Gordon served in the Marines from 1946-1947, and retired from Autolite/Prestolite in Bay City, MI.  He farmed for much of his life and owned farms in Pinconning and Ewen.  He was a talented Baseball player and fan and had a great love for animals. He was a voracious reader and could quote Plato, Aristotle and Thomas Jefferson.  A graveside service at Lakeview Cemetery will be held, at a time to be determined.  Arrangements entrusted to Lewis E. Wint & Son Funeral Home, Clarkston.  Memorials may be made to The Detroit Tigers Foundation, assisting Youth Sports, at detroittigersfoundation.com.  Online guestbook www.wintfuneralhome.com