BY TREVOR KEISER
Clarkston News Staff Writer
For Clarkston High School graduates John Chesley, Katie Harris, Kristy Robinson and Kendra Smith becoming teachers and returning to their hometown is a something they each consider to be special.
John Chesley, who is a fifth grade teacher at Bailey Lake Elementary, graduated from CHS in 2001 and then went on to Oakland University, Central Michigan University and Adrienne College.
Chesley said he and his wife Nikki’s goal was to return to Clarkston.
“Like most kids I just kind of wanted to go away, but once we got married and settled down we started thinking more of where we would want to raise our kids,” he explained. “Then, she worked in Clarkston for a year and then Ortonville and just fell in love with the whole area.”
He worked for an industrial distributor in the automotive industry, but always had a desire to teach. His wife, a teacher, was supportive of his return to school to get his teaching degree.
“Going back to when I was in 11th and 12th grades and playing sports in high school, a lot of the younger kids in the weight room would ask me how to do certain workout routines,” he said. “I enjoyed showing them how to do it.

Then, when I was in college I was our fraternity new member educator three times and I loved doing it.”
He taught at Taylor International Academy from Sept. 2015-Aug. 2016 and did his student teaching at West Maple Elementary in Birmingham from Jan.-April 2015.
Originally, Chesley wanted to be a secondary education teacher so he could coach football, too. When he checked into it the closest thing was social studies. To be more marketable, he decided to go with elementary.
“I was closest to science and language arts and those were two subjects I did really well in. As I got involved in elementary school, I found out, I love the age, especially upper elementary and middle school,” he added. “This is my third year in fifth grade, so I am finding a home here. I fell in love with the age and even though I would like to coach I’m enjoying it too much in elementary right now.”
The two teachers who influenced him the most were current Deputy Superintendent Shawn Ryan who was his science teacher at the high school and one of his middle school teachers, Mr. Matthews.
“Those two for some reason have always jumped out as someone who I always enjoyed their classes,” he said, noting that he adopted Matthews’ class rules into his own classroom. “Be prompt, prepared and polite.”
“I really want to bestow on my students the values of being a good citizen and being productive, how to problem solve, how to think critically and how to be just an integral part of society,” he said.
He and his wife have two kids, Drew, 4 and Brookes, 1. Drew is currently in pre-school in Clarkston. Chesley noted they are currently in the process of trying to sell their home and are looking to move to North Oakland County, but he’s hoping they can find a house in the Clarkston area.
“It’s definitely been interesting running into people, seeing my old teachers from high school or meeting people who are married to old classmates or neighbors of people I’ve known growing up,” he said. “I feel like there is going to be a lot of that for awhile. I couldn’t be happier for once again being apart of the community and getting back up here.”
His hobbies include golf, exercise, family and friends, and being an extra in movies or commercials.
Katie Harris is a music teacher at Clarkston Elementary and Bailey Lake. She graduated from CHS in 2001 before going on to Michigan State University where she got her bachelors in music education in 2004 and her

masters in music education in 2011.
For both her and her husband, Justin, being from Clarkston, coming back here was an easy choice. Justin teaches Jazz band at CHS and concert band at Sashabaw Middle School.
“This is where we want to raise our family she said. “We really like the area and my parents are still here and Justin’s mom lives close and we just really like it here.”
Prior to coming back to Clarkston Harris taught at the Flint Institute of Arts from 2014-2016, Our Shepherd Lutheran in Berkley from 2014-2015 and T.L. Handy Middle School in Bay City from 2007-2014.
The teacher who influenced her she said was her middle school band teacher Doug Doty.
“I just realized music was something I was good at in his class. He gave me a lot of opportunities to teach other kids like younger students,” she said. “When I was in eighth grade the sixth through eighth grades were all at Sashabaw Middle School at the time. So I was helping out with the sixth and seventh graders a lot. It was something I really loved to do.”
In high school Harris was the drum major of the marching band. She played flute.
Harris hopes to bestow on her students a love for music.
“I want all my students to love music in some capacity,” she said. “It doesn’t matter, some of them might like playing instruments, some might like to sing, some like to move, but I want to make sure they all really love class.”
She loves music because it reaches people in different ways. Her hobbies include walking, traveling to Northern Michigan, and being with family and friends.
“This is awesome, this is where I want to be, I’m so excited,” she added.
Kristy Robinson is a Special Education teacher at Clarkston Junior High School. She graduated from CHS in 2003 and participated in varsity basketball and volleyball.
She went on to Central Michigan University in 2008 and received a BA in Education. She then went to Saginaw Valley State University in 2015 and received a MA in Special Education, endorsed in Learning Disabilities and Cognitive Impairment.
She previously taught at West Bloomfield High School (Student Teaching), Michigan Collegiate High School in Warren and Almont High School in Almont.
Robinson was happy when the opportunity arose to come back to Clarkston.
“I’ve just always loved Clarkston,” she said. “Growing up here I had a really good experience and wanted to be back home and near my family.”
Her sister Libby works in the district at Clarkston Elementary as a Parapro and her mother was a teacher for over 30 years and her dad was a bus driver in the district.
“He was known as ‘Mr. Charlie’ the coolest bus driver ever,” she said.
Robinson said she was influenced by her middle school Physical Education and health teacher, Janet Thomas.
“She ironically is our PE and health teacher here (at the junior high). I remember it was eighth grade graduation and she called three people’s names to come up and receive the Physical Education Athletic Award and I happened to be

one of them. I was so surprised, but I really valued sports, working out and she influenced me,” Robinson said. “Some people don’t value PE, they are just like ‘oh whatever, it’s just gym,’ but it meant something to me and I went into it for my bachelors. Clearly it had a big impact on me.”
Robinson taught PE and health for five years, but while working at Michigan Collegiate High School she got emergency certified to teach Special Ed and that was when she started transitioning towards it. However, she also said being a teacher and teaching special education runs in the family.
“I have so many of my family members in special education. My older sister is a special education teacher. All my aunts are special education teachers, so I just felt like a calling in that direction,” she said. “Once I started getting into it, I really enjoyed it.”
Robinson added she hopes to bestow on her students to be apart of society and to contribute to it.
“I hear too often ‘oh I can’t do this because I have disability.’ I don’t want my students to think that,” she said. “I want my students to persevere over that and just contribute and be happy healthy people. I just don’t want them to be held back by something they could have the tools to work with and be a good person.”
Her hobbies include gardening, working out, photography and being with family.
Robinson said she loves the team feels at not only the junior high, but district wide as well.
Kendra Smith is a fourth grade teacher at Independence Elementary. She graduated from Clarkston in 2004 before going onto the University of Michigan for her bachelors and then Oakland University for her masters.
Prior to coming to Clarkston she taught in Waterford.
“I loved my school education here and was well prepared coming out of high school. I like the direction the district has gone since then. I’ve kind of followed along and feel like they got a lot of smart people doing a lot of smart things here that are good for kids,” Smith said. “I’m just happy to be apart of it and I’m just happy my kids could be apart of it now, too, and I can be apart of it as a parent and a teacher. It’s a good place to be.” 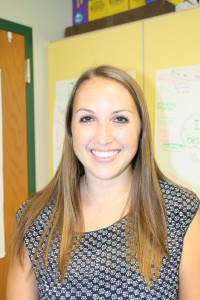 Smith’s daughter Nora is in the Young Fives program at Independence and her son Connor, who is three, is at preschool at Fun-Shine.
As far as what teachers influenced her, Smith said her mom, Linda Linegar, who teaches at Springfield Plains Elementary has always been her biggest influence.
“The high school teacher who stuck out to me was Nancy Mahoney who taught AP Calculus,” she added. “Besides everything I learned from her in the classroom, she just had a very good way of a caring about the people and who her students were as people and kind of connecting with them.”
Her love of school is something she hopes to bestow on her students.
“I want school to be a place they want to be because they care about their learning, but mostly because we care about each other,” Smith said. “I want to know them and what makes them unique. I want us to kind of operate like a family and be there for each other and grow together and learn together.”
Her hobbies include outdoors activities like winter sports and camping.
“We did a lot of that this summer, anything on a lake or with family, a lot of Up North,” she said.
She also enjoys sports and watching the local teams.
“I like watching sports,” she said. “I like Michigan Football. I like the Tigers, all the Detroit stuff, less of the East Lansing sports. I am probably the only teacher who didn’t go there. I also like playing euchre – that’s a big interest.”