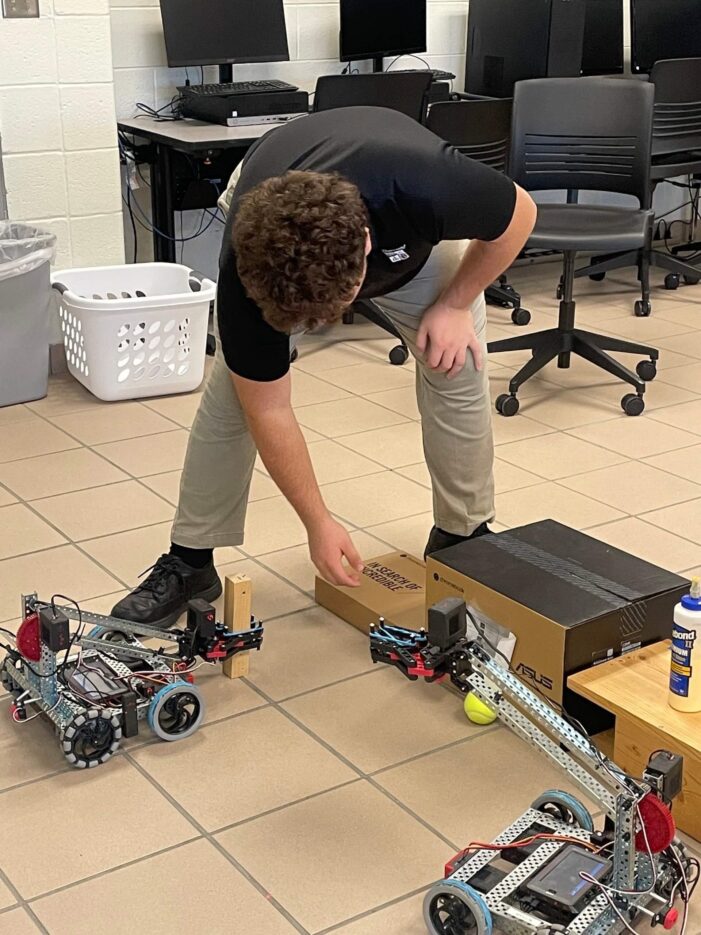 If I told you to pick up a ball in front of you and place it on a box 10 feet away, you wouldn’t think too much about it.
What if you had to ask someone else to do the same thing? You would probably say something to the effect of, “Go put that ball on that box.”
These instructions are simple and concise; anyone would be able to follow those directions. However, those instructions make a lot of assumptions. When you give directions to others, you use your senses to relay information. In this example, you assume they know where the ball is, where the box is, how heavy the ball is, how big the ball is, how big the box is, and how to get to the box.
Robots don’t know anything; they follow simple commands perfectly and don’t know if they are doing it right or not. This makes giving robots instructions very difficult. You have to be able to give instructions as detailed and as organized as possible while still being able to adapt to adversity.
The robotics class at Everest Collegiate aims to find the best solution to these simple problems. I was in this class in Trimester I of the 2021-22 school year. I have to say it was the most annoying and fun class I took all trimester. Robotics is annoying by design due to the nature of the robot, which follows instructions as closely as possible. This creates puzzles out of the most trivial tasks that require an insane amount of detail and organization. But when you do achieve your goal, the sense of accomplishment is great.
The class is made up of different concepts of gradually increasing complexity with supplemental projects and tests to go along with each new unit. In each unit, we learned more about how a robot works and “thinks.” To go along with learning about the robot itself, we learned about basic programming languages like C and Vexcode.
Robotics not only tests your ability to work on a robot individually, but as a team. Although there were no team projects, if someone was having trouble with their code or their robot, it wouldn’t be uncommon to see a few people gathered around their computer brainstorming how to fix it.
Robotics is not only for people who want to go into a STEM field in college, but for anyone who enjoys puzzle solving and is interested in robots or programming.
I originally enrolled in this class to make my class selection look good for an engineering college, but after experiencing and enjoying robotics myself, I now see electronics as a possible path I might want to pursue.